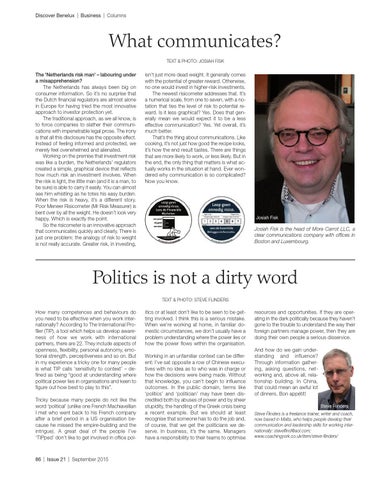 The 'Netherlands risk man' – labouring under a misapprehension? The Netherlands has always been big on consumer information. So it’s no surprise that the Dutch financial regulators are almost alone in Europe for having tried the most innovative approach to investor protection yet. The traditional approach, as we all know, is to force companies to slather their communications with impenetrable legal prose. The irony is that all this disclosure has the opposite effect. Instead of feeling informed and protected, we merely feel overwhelmed and alienated. Working on the premise that investment risk was like a burden, the Netherlands’ regulators created a simple, graphical device that reflects how much risk an investment involves. When the risk is light, the little man (and it is a man, to be sure) is able to carry it easily. You can almost see him whistling as he totes his easy burden. When the risk is heavy, it’s a different story. Poor Meneer Risicometer (Mr Risk Measurer) is bent over by all the weight. He doesn’t look very happy. Which is exactly the point. So the risicometer is an innovative approach that communicates quickly and clearly. There is just one problem: the analogy of risk to weight is not really accurate. Greater risk, in investing,

isn’t just more dead weight. It generally comes with the potential of greater reward. Otherwise, no one would invest in higher-risk investments. The newest risicometer addresses that. It’s a numerical scale, from one to seven, with a notation that ties the level of risk to potential reward. Is it less graphical? Yes. Does that generally mean we would expect it to be a less effective communication? Yes. Yet overall, it’s much better. That’s the thing about communications. Like cooking, it’s not just how good the recipe looks, it’s how the end result tastes. There are things that are more likely to work, or less likely. But in the end, the only thing that matters is what actually works in the situation at hand. Ever wondered why communication is so complicated? Now you know.

Politics is not a dirty word TEXT & PHOTO: STEVE FLINDERS

How many competences and behaviours do you need to be effective when you work internationally? According to The International Profiler (TIP), a tool which helps us develop awareness of how we work with international partners, there are 22. They include aspects of openness, flexibility, personal autonomy, emotional strength, perceptiveness and so on. But in my experience a tricky one for many people is what TIP calls ‘sensitivity to context’ – defined as being “good at understanding where political power lies in organisations and keen to figure out how best to play to this”. Tricky because many people do not like the word ‘political’ (unlike one French Machiavellian I met who went back to his French company after a brief period in a US organisation because he missed the empire-building and the intrigue). A great deal of the people I’ve ‘TIPped’ don’t like to get involved in office pol-

itics or at least don’t like to be seen to be getting involved. I think this is a serious mistake. When we’re working at home, in familiar domestic circumstances, we don’t usually have a problem understanding where the power lies or how the power flows within the organisation. Working in an unfamiliar context can be different: I’ve sat opposite a row of Chinese executives with no idea as to who was in charge or how the decisions were being made. Without that knowledge, you can’t begin to influence outcomes. In the public domain, terms like ‘politics’ and ‘politician’ may have been discredited both by abuses of power and by sheer stupidity, the handling of the Greek crisis being a recent example. But we should at least recognise that someone has to do the job and, of course, that we get the politicians we deserve. In business, it’s the same. Managers have a responsibility to their teams to optimise

resources and opportunities. If they are operating in the dark politically because they haven’t gone to the trouble to understand the way their foreign partners manage power, then they are doing their own people a serious disservice. And how do we gain understanding and influence? Through information gathering, asking questions, networking and, above all, relationship building. In China, that could mean an awful lot of dinners. Bon appétit! Steve Flinders Steve Flinders is a freelance trainer, writer and coach, now based in Malta, who helps people develop their communication and leadership skills for working internationally: steveflind@aol.com; www.coachingyork.co.uk/item/steve-flinders/