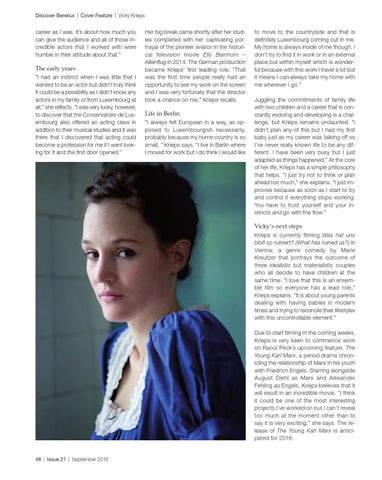 career as I was. It’s about how much you can give the audience and all of those incredible actors that I worked with were humble in their attitude about that.”

The early years “I had an instinct when I was little that I wanted to be an actor but didn’t truly think it could be a possibility as I didn’t know any actors in my family or from Luxembourg at all,” she reflects. “I was very lucky, however, to discover that the Conservatoire de Luxembourg also offered an acting class in addition to their musical studies and it was there that I discovered that acting could become a profession for me if I went looking for it and the first door opened.”

Her big break came shortly after her studies completed with her captivating portrayal of the pioneer aviator in the historical television movie Elly Beinhorn – Alleinflug in 2014. The German production became Krieps’ first leading role. “That was the first time people really had an opportunity to see my work on the screen and I was very fortunate that the director took a chance on me,” Krieps recalls.

Life in Berlin “I always felt European in a way, as opposed to Luxembourgish necessarily, probably because my home country is so small, ” Krieps says. “I live in Berlin where I moved for work but I do think I would like

to move to the countryside and that is definitely Luxembourg coming out in me. My home is always inside of me though. I don’t try to find it in work or in an external place but within myself which is wonderful because with this work I travel a lot but it means I can always take my home with me wherever I go.” Juggling the commitments of family life with two children and a career that is constantly evolving and developing is a challenge, but Krieps remains undaunted. “I didn’t plan any of this but I had my first baby just as my career was talking off so I’ve never really known life to be any different. I have been very busy but I just adapted as things happened.” At the core of her life, Krieps has a simple philosophy that helps. “I just try not to think or plan ahead too much,” she explains. “I just improvise because as soon as I start to try and control it everything stops working. You have to trust yourself and your instincts and go with the flow.”

Vicky’s next steps Krieps is currently filming Was hat uns bloß so ruiniert? (What has ruined us?) in Vienna; a genre comedy by Marie Kreutzer that portrays the outcome of three idealistic but materialistic couples who all decide to have children at the same time. “I love that this is an ensemble film so everyone has a lead role,” Krieps explains. “It is about young parents dealing with having babies in modern times and trying to reconcile their lifestyles with this uncontrollable element.” Due to start filming in the coming weeks, Krieps is very keen to commence work on Raoul Peck’s upcoming feature, The Young Karl Marx, a period drama chronicling the relationship of Marx in his youth with Friedrich Engels. Starring alongside August Diehl as Marx and Alexander Fehling as Engels, Krieps believes that it will result in an incredible movie. “I think it could be one of the most interesting projects I’ve worked on but I can’t reveal too much at the moment other than to say it is very exciting,” she says. The release of The Young Karl Marx is anticipated for 2016.