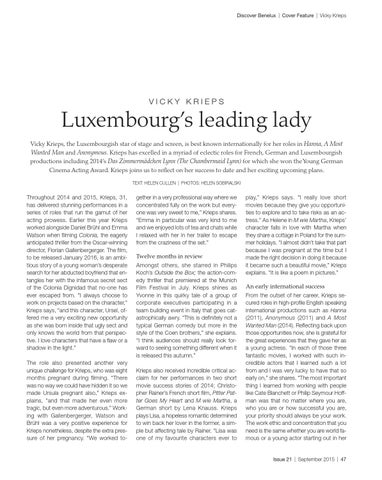 Luxembourg’s leading lady Vicky Krieps, the Luxembourgish star of stage and screen, is best known internationally for her roles in Hanna, A Most Wanted Man and Anonymous. Krieps has excelled in a myriad of eclectic roles for French, German and Luxembourgish productions including 2014’s Das Zimmermädchen Lynn (The Chambermaid Lynn) for which she won the Young German Cinema Acting Award. Krieps joins us to reflect on her success to date and her exciting upcoming plans. TEXT: HELEN CULLEN | PHOTOS: HELEN SOBIRALSKI

Throughout 2014 and 2015, Krieps, 31, has delivered stunning performances in a series of roles that run the gamut of her acting prowess. Earlier this year Krieps worked alongside Daniel Brühl and Emma Watson when filming Colonia, the eagerly anticipated thriller from the Oscar-winning director, Florian Gallenbergerger. The film, to be released January 2016, is an ambitious story of a young woman’s desperate search for her abducted boyfriend that entangles her with the infamous secret sect of the Colonia Dignidad that no-one has ever escaped from. “I always choose to work on projects based on the character,” Krieps says, “and this character, Ursel, offered me a very exciting new opportunity as she was born inside that ugly sect and only knows the world from that perspective. I love characters that have a flaw or a shadow in the light.” The role also presented another very unique challenge for Krieps, who was eight months pregnant during filming. “There was no way we could have hidden it so we made Ursula pregnant also,” Krieps explains, “and that made her even more tragic, but even more adventurous.” Working with Gallenbergerger, Watson and Brühl was a very positive experience for Krieps nonetheless, despite the extra pressure of her pregnancy. “We worked to-

gether in a very professional way where we concentrated fully on the work but everyone was very sweet to me,” Krieps shares. “Emma in particular was very kind to me and we enjoyed lots of tea and chats while I relaxed with her in her trailer to escape from the craziness of the set.”

Twelve months in review Amongst others, she starred in Philips Koch’s Outside the Box; the action-comedy thriller that premiered at the Munich Film Festival in July. Krieps shines as Yvonne in this quirky tale of a group of corporate executives participating in a team building event in Italy that goes catastrophically awry. “This is definitely not a typical German comedy but more in the style of the Coen brothers,” she explains. “I think audiences should really look forward to seeing something different when it is released this autumn.” Krieps also received incredible critical acclaim for her performances in two short movie success stories of 2014; Christopher Rainer’s French short film, Pitter Patter Goes My Heart and M wie Martha, a German short by Lena Knauss. Krieps plays Lisa, a hopeless romantic determined to win back her lover in the former, a simple but affecting tale by Rainer. “Lisa was one of my favourite characters ever to

play,” Krieps says. “I really love short movies because they give you opportunities to explore and to take risks as an actress.” As Helene in M wie Martha, Krieps’ character falls in love with Martha when they share a cottage in Poland for the summer holidays. “I almost didn’t take that part because I was pregnant at the time but I made the right decision in doing it because it became such a beautiful movie,” Krieps explains. “It is like a poem in pictures.”

An early international success From the outset of her career, Krieps secured roles in high-profile English speaking international productions such as Hanna (2011), Anonymous (2011) and A Most Wanted Man (2014). Reflecting back upon those opportunities now, she is grateful for the great experiences that they gave her as a young actress. “In each of those three fantastic movies, I worked with such incredible actors that I learned such a lot from and I was very lucky to have that so early on,” she shares. “The most important thing I learned from working with people like Cate Blanchett or Philip Seymour Hoffman was that no matter where you are, who you are or how successful you are, your priority should always be your work. The work ethic and concentration that you need is the same whether you are world famous or a young actor starting out in her