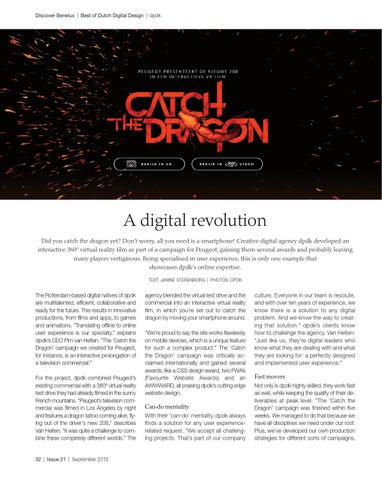 A digital revolution Did you catch the dragon yet? Don’t worry, all you need is a smartphone! Creative digital agency dpdk developed an interactive 360º virtual reality film as part of a campaign for Peugeot, gaining them several awards and probably leaving many players vertiginous. Being specialised in user experience, this is only one example that showcases dpdk’s online expertise. TEXT: JANINE STERENBORG | PHOTOS: DPDK

The Rotterdam-based digital natives of dpdk are multitalented, efficient, collaborative and ready for the future. This results in innovative productions, from films and apps, to games and animations. “Translating offline to online user experience is our specialty,” explains dpdk’s CEO Pim van Helten. “The ‘Catch the Dragon’ campaign we created for Peugeot, for instance, is an interactive prolongation of a television commercial.” For the project, dpdk combined Peugeot’s existing commercial with a 360º virtual reality test drive they had already filmed in the sunny French mountains. “Peugeot’s television commercial was filmed in Los Angeles by night and features a dragon tattoo coming alive, flying out of the driver&#39;s new 208,” describes Van Helten. “It was quite a challenge to combine these completely different worlds.” The

agency blended the virtual test drive and the commercial into an interactive virtual reality film, in which you’re set out to catch the dragon by moving your smartphone around. “We’re proud to say the site works flawlessly on mobile devices, which is a unique feature for such a complex product.” The &#39;Catch the Dragon&#39; campaign was critically acclaimed internationally and gained several awards, like a CSS design award, two FWA’s (Favourite Website Awards) and an AWWWARD, all praising dpdk’s cutting edge website design.

Can-do mentality With their ‘can-do’ mentality, dpdk always finds a solution for any user experiencerelated request. “We accept all challenging projects. That’s part of our company

culture. Everyone in our team is resolute, and with over ten years of experience, we know there is a solution to any digital problem. And we know the way to creating that solution.” dpdk’s clients know how to challenge the agency. Van Helten: “Just like us, they’re digital leaders who know what they are dealing with and what they are looking for: a perfectly designed and implemented user experience.”

Fast movers Not only is dpdk highly skilled, they work fast as well, while keeping the quality of their deliverables at peak level. “The &#39;Catch the Dragon&#39; campaign was finished within five weeks. We managed to do that because we have all disciplines we need under our roof. Plus, we’ve developed our own production strategies for different sorts of campaigns,