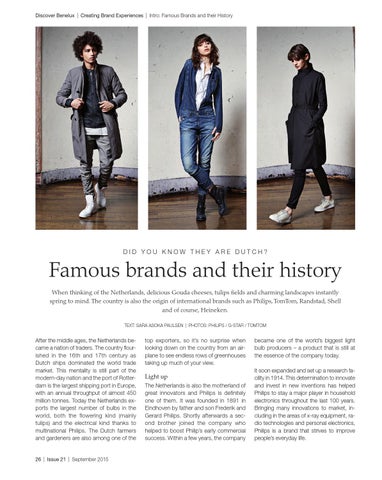 DID YOU KNOW THEY ARE DUTCH?

Famous brands and their history When thinking of the Netherlands, delicious Gouda cheeses, tulips fields and charming landscapes instantly spring to mind. The country is also the origin of international brands such as Philips, TomTom, Randstad, Shell and of course, Heineken. TEXT: SARA ASOKA PAULSEN | PHOTOS: PHILIPS / G-STAR / TOMTOM

After the middle ages, the Netherlands became a nation of traders. The country flourished in the 16th and 17th century as Dutch ships dominated the world trade market. This mentality is still part of the modern-day nation and the port of Rotterdam is the largest shipping port in Europe, with an annual throughput of almost 450 million tonnes. Today the Netherlands exports the largest number of bulbs in the world, both the flowering kind (mainly tulips) and the electrical kind thanks to multinational Philips. The Dutch farmers and gardeners are also among one of the

top exporters, so it’s no surprise when looking down on the country from an airplane to see endless rows of greenhouses taking up much of your view.

Light up The Netherlands is also the motherland of great innovators and Philips is definitely one of them. It was founded in 1891 in Eindhoven by father and son Frederik and Gerard Philips. Shortly afterwards a second brother joined the company who helped to boost Philip’s early commercial success. Within a few years, the company

became one of the world’s biggest light bulb producers – a product that is still at the essence of the company today. It soon expanded and set up a research facility in 1914. This determination to innovate and invest in new inventions has helped Philips to stay a major player in household electronics throughout the last 100 years. Bringing many innovations to market, including in the areas of x-ray equipment, radio technologies and personal electronics, Philips is a brand that strives to improve people’s everyday life.