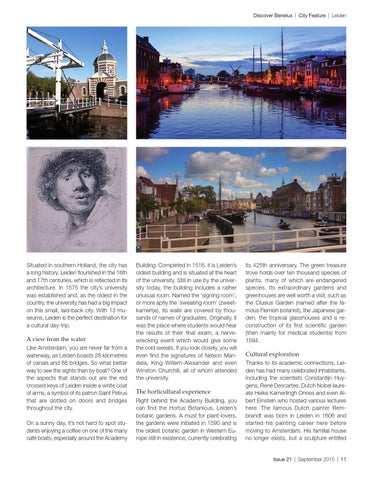 Situated in southern Holland, the city has a long history. Leiden flourished in the 16th and 17th centuries, which is reflected in its architecture. In 1575 the city’s university was established and, as the oldest in the country, the university has had a big impact on this small, laid-back city. With 13 museums, Leiden is the perfect destination for a cultural day-trip.

A view from the water Like Amsterdam, you are never far from a waterway, as Leiden boasts 28 kilometres of canals and 88 bridges. So what better way to see the sights than by boat? One of the aspects that stands out are the red crossed keys of Leiden inside a white coat of arms, a symbol of its patron Saint Petrus that are dotted on doors and bridges throughout the city. On a sunny day, it’s not hard to spot students enjoying a coffee on one of the many café boats, especially around the Academy

Building. Completed in 1516, it is Leiden’s oldest building and is situated at the heart of the university. Still in use by the university today, the building includes a rather unusual room. Named the ‘signing room’, or more aptly the ‘sweating room’ (zweetkamertje), its walls are covered by thousands of names of graduates. Originally, it was the place where students would hear the results of their final exam, a nervewrecking event which would give some the cold sweats. If you look closely, you will even find the signatures of Nelson Mandela, King Willem-Alexander and even Winston Churchill, all of whom attended the university.

The horticultural experience Right behind the Academy Building, you can find the Hortus Botanicus, Leiden’s botanic gardens. A must for plant-lovers, the gardens were initiated in 1590 and is the oldest botanic garden in Western Europe still in existence, currently celebrating

its 425th anniversary. The green treasure trove holds over ten thousand species of plants, many of which are endangered species. Its extraordinary gardens and greenhouses are well worth a visit, such as the Clusius Garden (named after the famous Flemish botanist), the Japanese garden, the tropical glasshouses and a reconstruction of its first scientific garden (then mainly for medical students) from 1594.

Cultural exploration Thanks to its academic connections, Leiden has had many celebrated inhabitants, including the scientists Constantijn Huygens, René Descartes, Dutch Nobel laureate Heike Kamerlingh Onnes and even Albert Einstein who hosted various lectures here. The famous Dutch painter Rembrandt was born in Leiden in 1606 and started his painting career here before moving to Amsterdam. His familial house no longer exists, but a sculpture entitled