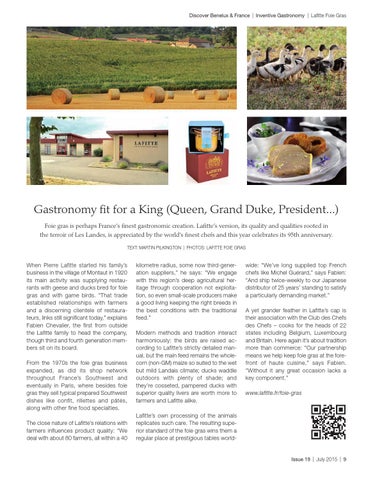 When Pierre Lafitte started his family’s business in the village of Montaut in 1920 its main activity was supplying restaurants with geese and ducks bred for foie gras and with game birds. “That trade established relationships with farmers and a discerning clientele of restaurateurs, links still significant today,” explains Fabien Chevalier, the first from outside the Lafitte family to head the company, though third and fourth generation members sit on its board. From the 1970s the foie gras business expanded, as did its shop network throughout France’s Southwest and eventually in Paris, where besides foie gras they sell typical prepared Southwest dishes like confit, rillettes and pâtés, along with other fine food specialties. The close nature of Lafitte’s relations with farmers influences product quality: “We deal with about 80 farmers, all within a 40

kilometre radius, some now third-generation suppliers,” he says: “We engage with this region’s deep agricultural heritage through cooperation not exploitation, so even small-scale producers make a good living keeping the right breeds in the best conditions with the traditional feed.” Modern methods and tradition interact harmoniously: the birds are raised according to Lafitte’s strictly detailed manual, but the main feed remains the wholecorn (non-GM) maize so suited to the wet but mild Landais climate; ducks waddle outdoors with plenty of shade; and they’re cosseted, pampered ducks with superior quality livers are worth more to farmers and Lafitte alike.

wide: “We’ve long supplied top French chefs like Michel Guérard,” says Fabien: “And ship twice-weekly to our Japanese distributor of 25 years’ standing to satisfy a particularly demanding market.” A yet grander feather in Lafitte’s cap is their association with the Club des Chefs des Chefs – cooks for the heads of 22 states including Belgium, Luxembourg and Britain. Here again it’s about tradition more than commerce: “Our partnership means we help keep foie gras at the forefront of haute cuisine,” says Fabien. “Without it any great occasion lacks a key component.” www.lafitte.fr/foie-gras

Lafitte’s own processing of the animals replicates such care. The resulting superior standard of the foie gras wins them a regular place at prestigious tables world-