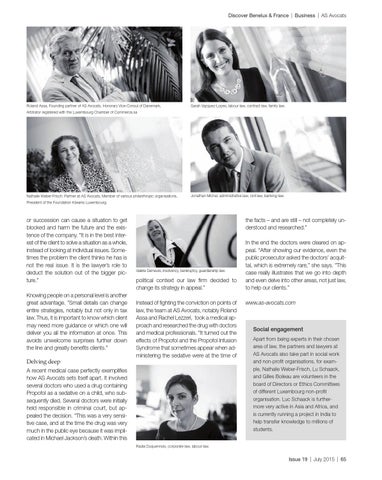 President of the Foundation Kiwanis Luxembourg.

or succession can cause a situation to get blocked and harm the future and the existence of the company. “It is in the best interest of the client to solve a situation as a whole, instead of looking at individual issues. Sometimes the problem the client thinks he has is not the real issue. It is the lawyer’s role to deduct the solution out of the bigger picture.” Knowing people on a personal level is another great advantage. “Small details can change entire strategies, notably but not only in tax law. Thus, it is important to know which client may need more guidance or which one will deliver you all the information at once. This avoids unwelcome surprises further down the line and greatly benefits clients.”

the facts – and are still – not completely understood and researched.”

political context our law firm decided to change its strategy in appeal.” Instead of fighting the conviction on points of law, the team at AS Avocats, notably Roland Assa and Rachel Lezzeri, took a medical approach and researched the drug with doctors and medical professionals. “It turned out the effects of Propofol and the Propofol Infusion Syndrome that sometimes appear when administering the sedative were at the time of

Delving deep A recent medical case perfectly exemplifies how AS Avocats sets itself apart. It involved several doctors who used a drug containing Propofol as a sedative on a child, who subsequently died. Several doctors were initially held responsible in criminal court, but appealed the decision. “This was a very sensitive case, and at the time the drug was very much in the public eye because it was implicated in Michael Jackson’s death. Within this

In the end the doctors were cleared on appeal. “After showing our evidence, even the public prosecutor asked the doctors’ acquittal, which is extremely rare,” she says. “This case really illustrates that we go into depth and even delve into other areas, not just law, to help our clients.” www.as-avocats.com

Social engagement Apart from being experts in their chosen area of law, the partners and lawyers at AS Avocats also take part in social work and non-profit organisations, for example, Nathalie Weber-Frisch, Lu Schaack, and Gilles Boileau are volunteers in the board of Directors or Ethics Committees of different Luxembourg non-profit organisation. Luc Schaack is furthermore very active in Asia and Africa, and is currently running a project in India to help transfer knowledge to millions of students.