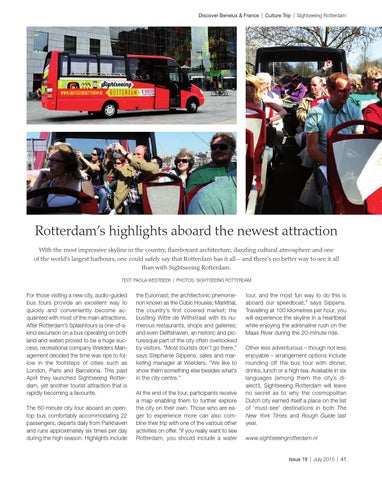 Rotterdam’s highlights aboard the newest attraction With the most impressive skyline in the country, flamboyant architecture, dazzling cultural atmosphere and one of the world’s largest harbours, one could safely say that Rotterdam has it all – and there’s no better way to see it all than with Sightseeing Rotterdam. TEXT: PAOLA WESTBEEK | PHOTOS: SIGHTSEEING ROTTERDAM

For those visiting a new city, audio-guided bus tours provide an excellent way to quickly and conveniently become acquainted with most of the main attractions. After Rotterdam’s Splashtours (a one-of-akind excursion on a bus operating on both land and water) proved to be a huge success, recreational company Wielders Management decided the time was ripe to follow in the footsteps of cities such as London, Paris and Barcelona. This past April they launched Sightseeing Rotterdam, yet another tourist attraction that is rapidly becoming a favourite. The 60-minute city tour aboard an opentop bus comfortably accommodating 22 passengers, departs daily from Parkhaven and runs approximately six times per day during the high season. Highlights include

the Euromast; the architectonic phenomenon known as the Cubic Houses; Markthal, the country’s first covered market; the bustling Witte de Withstraat with its numerous restaurants, shops and galleries; and even Delftshaven, an historic and picturesque part of the city often overlooked by visitors. “Most tourists don’t go there,” says Stephanie Sippens, sales and marketing manager at Wielders. “We like to show them something else besides what’s in the city centre.” At the end of the tour, participants receive a map enabling them to further explore the city on their own. Those who are eager to experience more can also combine their trip with one of the various other activities on offer. “If you really want to see Rotterdam, you should include a water

tour, and the most fun way to do this is aboard our speedboat,” says Sippens. Travelling at 100 kilometres per hour, you will experience the skyline in a heartbeat while enjoying the adrenaline rush on the Maas River during the 20-minute ride. Other less adventurous – though not less enjoyable – arrangement options include rounding off the bus tour with dinner, drinks, lunch or a high tea. Available in six languages (among them the city’s dialect!), Sightseeing Rotterdam will leave no secret as to why the cosmopolitan Dutch city earned itself a place on the list of ‘must-see’ destinations in both The New York Times and Rough Guide last year. www.sightseeingrotterdam.nl