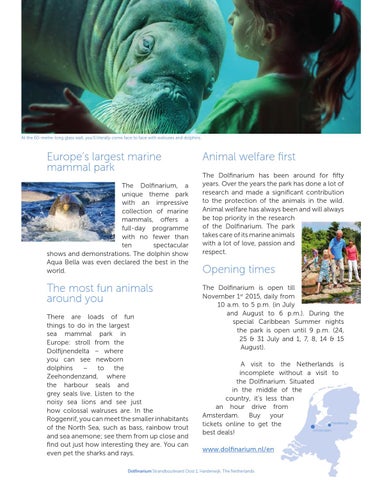 At the 60-metre-long glass wall, you’ll literally come face to face with walruses and dolphins.

Europe’s largest marine mammal park The Dolfinarium, a unique theme park with an impressive collection of marine mammals, offers a full-day programme with no fewer than ten spectacular shows and demonstrations. The dolphin show Aqua Bella was even declared the best in the world.

The most fun animals around you There are loads of fun things to do in the largest sea mammal park in Europe: stroll from the Dolfijnendelta – where you can see newborn dolphins – to the Zeehondenzand, where the harbour seals and grey seals live. Listen to the noisy sea lions and see just how colossal walruses are. In the Roggenrif, you can meet the smaller inhabitants of the North Sea, such as bass, rainbow trout and sea anemone; see them from up close and find out just how interesting they are. You can even pet the sharks and rays.

Animal welfare first The Dolfinarium has been around for fifty years. Over the years the park has done a lot of research and made a significant contribution to the protection of the animals in the wild. Animal welfare has always been and will always be top priority in the research of the Dolfinarium. The park takes care of its marine animals with a lot of love, passion and respect.

Opening times The Dolfinarium is open till November 1st 2015, daily from 10 a.m. to 5 p.m. (in July and August to 6 p.m.). During the special Caribbean Summer nights the park is open until 9 p.m. (24, 25 & 31 July and 1, 7, 8, 14 & 15 August). A visit to the Netherlands is incomplete without a visit to the Dolfinarium. Situated in the middle of the country, it’s less than an hour drive from Amsterdam. Buy your Harderwijk tickets online to get the Amsterdam best deals! www.dolfinarium.nl/en