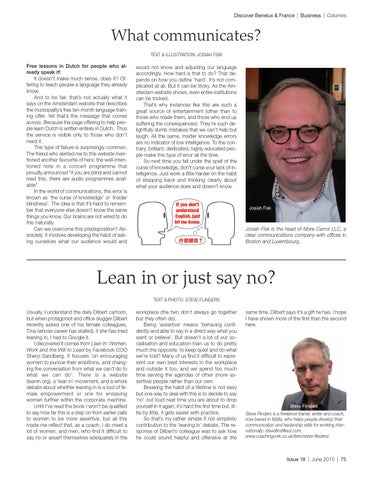 Free lessons in Dutch for people who already speak it! It doesn’t make much sense, does it? Offering to teach people a language they already know. And to be fair, that’s not actually what it says on the Amsterdam website that describes the municipality’s free ten-month language training offer. Yet that’s the message that comes across. Because the page offering to help people learn Dutch is written entirely in Dutch. Thus the service is visible only to those who don’t need it. This type of failure is surprisingly common. The friend who alerted me to this website mentioned another favourite of hers: the well-intentioned note in a concert programme that proudly announced “if you are blind and cannot read this, there are audio programmes available”. In the world of communications, this error is known as ‘the curse of knowledge’ or ‘insider blindness’. The idea is that it’s hard to remember that everyone else doesn’t know the same things you know. Our brains are not wired to do this naturally. Can we overcome this predisposition? Absolutely. It involves developing the habit of asking ourselves what our audience would and

would not know and adjusting our language accordingly. How hard is that to do? That depends on how you define ‘hard’. It’s not complicated at all. But it can be tricky. As the Amsterdam website shows, even entire institutions can be tricked. That’s why instances like this are such a great source of entertainment (other than to those who made them, and those who end up suffering the consequences). They’re such delightfully dumb mistakes that we can’t help but laugh. All the same, insider knowledge errors are no indicator of low intelligence. To the contrary: brilliant, dedicated, highly educated people make this type of error all the time. So next time you fall under the spell of the curse of knowledge, don’t curse your lack of intelligence. Just work a little harder on the habit of stepping back and thinking clearly about what your audience does and doesn’t know.

Lean in or just say no? TEXT & PHOTO: STEvE FLINDERS

Usually, I understand the daily Dilbert cartoon, but when protagonist and office slugger Dilbert recently asked one of his female colleagues, Tina (whose career has stalled), if she has tried leaning in, I had to Google it. I discovered it comes from Lean In: Women, Work and the Will to Lead by Facebook COO Sheryl Sandberg. It focuses ‘on encouraging women to pursue their ambitions, and changing the conversation from what we can’t do to what we can do’. There is a website (leanin.org), a ‘lean in’ movement, and a whole debate about whether leaning in is a tool of female empowerment or one for enslaving women further within the corporate machine. Until I’ve read the book I won’t be qualified to say how far this is a step on from earlier calls to women to be more assertive, but all this made me reflect that, as a coach, I do meet a lot of women, and men, who find it difficult to say no or assert themselves adequately in the

workplace (the two don’t always go together but they often do). Being ‘assertive’ means ‘behaving confidently and able to say in a direct way what you want or believe’. But doesn’t a lot of our socialisation and education train us to do pretty much the opposite: to keep quiet and do what we’re told? Many of us find it difficult to represent our own best interests in the workplace and outside it too, and we spend too much time serving the agendas of other (more assertive) people rather than our own. Breaking the habit of a lifetime is not easy but one way to deal with this is to decide to say ‘no’ out loud next time you are about to drop yourself in it again, it’s hard the first time but, little by little, it gets easier with practice. So that’s my rather simple if not simplistic contribution to the ‘leaning in’ debate. The response of Dilbert’s colleague was to ask how he could sound helpful and offensive at the

same time. Dilbert says it’s a gift he has. I hope I have shown more of the first than the second here.

Steve Flinders Steve Flinders is a freelance trainer, writer and coach, now based in Malta, who helps people develop their communication and leadership skills for working internationally: steveflind@aol.com; www.coachingyork.co.uk/item/steve-flinders/