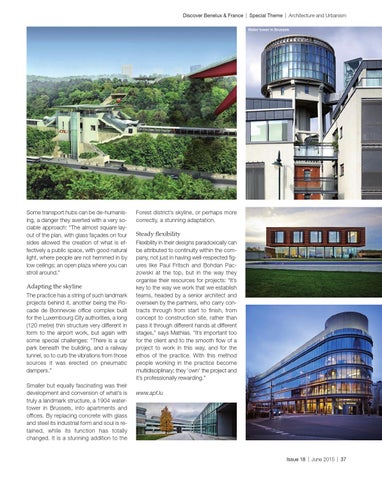 Some transport hubs can be de-humanising, a danger they averted with a very sociable approach: “The almost square layout of the plan, with glass façades on four sides allowed the creation of what is effectively a public space, with good natural light, where people are not hemmed in by low ceilings; an open plaza where you can stroll around.”

Adapting the skyline The practice has a string of such landmark projects behind it, another being the Rocade de Bonnevoie office complex built for the Luxembourg City authorities, a long (120 metre) thin structure very different in form to the airport work, but again with some special challenges: “There is a car park beneath the building, and a railway tunnel, so to curb the vibrations from those sources it was erected on pneumatic dampers.” Smaller but equally fascinating was their development and conversion of what’s is truly a landmark structure, a 1904 watertower in Brussels, into apartments and offices. By replacing concrete with glass and steel its industrial form and soul is retained, while its function has totally changed. It is a stunning addition to the

Steady flexibility Flexibility in their designs paradoxically can be attributed to continuity within the company, not just in having well-respected figures like Paul Fritsch and Bohdan Paczowski at the top, but in the way they organise their resources for projects: “It’s key to the way we work that we establish teams, headed by a senior architect and overseen by the partners, who carry contracts through from start to finish, from concept to construction site, rather than pass it through different hands at different stages,” says Mathias. “It’s important too for the client and to the smooth flow of a project to work in this way, and for the ethos of the practice. With this method people working in the practice become multidisciplinary; they ‘own’ the project and it’s professionally rewarding.” www.apf.lu