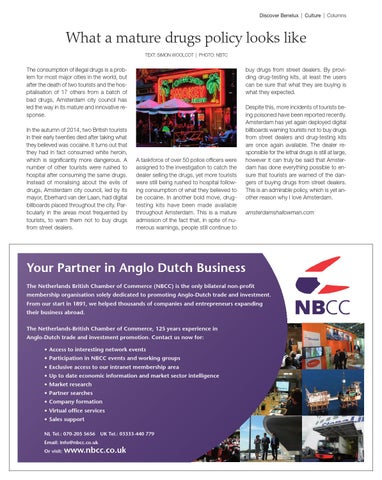 buy drugs from street dealers. By providing drug-testing kits, at least the users can be sure that what they are buying is what they expected.

The consumption of illegal drugs is a problem for most major cities in the world, but after the death of two tourists and the hospitalisation of 17 others from a batch of bad drugs, Amsterdam city council has led the way in its mature and innovative response. In the autumn of 2014, two British tourists in their early twenties died after taking what they believed was cocaine. It turns out that they had in fact consumed white heroin, which is significantly more dangerous. A number of other tourists were rushed to hospital after consuming the same drugs. Instead of moralising about the evils of drugs, Amsterdam city council, led by its mayor, Eberhard van der Laan, had digital billboards placed throughout the city. Particularly in the areas most frequented by tourists, to warn them not to buy drugs from street dealers.

A taskforce of over 50 police officers were assigned to the investigation to catch the dealer selling the drugs, yet more tourists were still being rushed to hospital following consumption of what they believed to be cocaine. In another bold move, drugtesting kits have been made available throughout Amsterdam. This is a mature admission of the fact that, in spite of numerous warnings, people still continue to

Despite this, more incidents of tourists being poisoned have been reported recently. Amsterdam has yet again deployed digital billboards warning tourists not to buy drugs from street dealers and drug-testing kits are once again available. The dealer responsible for the lethal drugs is still at large, however it can truly be said that Amsterdam has done everything possible to ensure that tourists are warned of the dangers of buying drugs from street dealers. This is an admirable policy, which is yet another reason why I love Amsterdam. amsterdamshallowman.com