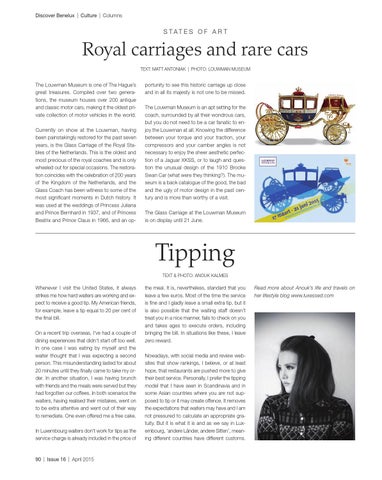 The Louwman Museum is one of The Hague’s great treasures. Compiled over two generations, the museum houses over 200 antique and classic motor cars, making it the oldest private collection of motor vehicles in the world. Currently on show at the Louwman, having been painstakingly restored for the past seven years, is the Glass Carriage of the Royal Stables of the Netherlands. This is the oldest and most precious of the royal coaches and is only wheeled out for special occasions. The restoration coincides with the celebration of 200 years of the Kingdom of the Netherlands, and the Glass Coach has been witness to some of the most significant moments in Dutch history. It was used at the weddings of Princess Juliana and Prince Bernhard in 1937, and of Princess Beatrix and Prince Claus in 1966, and an op-

portunity to see this historic carriage up close and in all its majesty is not one to be missed. The Louwman Museum is an apt setting for the coach, surrounded by all their wondrous cars, but you do not need to be a car fanatic to enjoy the Louwman at all. Knowing the difference between your torque and your traction, your compressors and your camber angles is not necessary to enjoy the sheer aesthetic perfection of a Jaguar XKSS, or to laugh and question the unusual design of the 1910 Brooke Swan Car (what were they thinking?). The museum is a back catalogue of the good, the bad and the ugly of motor design in the past century and is more than worthy of a visit. The Glass Carriage at the Louwman Museum is on display until 21 June.

Whenever I visit the United States, it always strikes me how hard waiters are working and expect to receive a good tip. My American friends, for example, leave a tip equal to 20 per cent of the final bill. On a recent trip overseas, I've had a couple of dining experiences that didn't start off too well. In one case I was eating by myself and the waiter thought that I was expecting a second person. This misunderstanding lasted for about 20 minutes until they finally came to take my order. In another situation, I was having brunch with friends and the meals were served but they had forgotten our coffees. In both scenarios the waiters, having realised their mistakes, went on to be extra attentive and went out of their way to remediate. One even offered me a free cake. In Luxembourg waiters don't work for tips as the service charge is already included in the price of

the meal. It is, nevertheless, standard that you leave a few euros. Most of the time the service is fine and I gladly leave a small extra tip, but it is also possible that the waiting staff doesn’t treat you in a nice manner, fails to check on you and takes ages to execute orders, including bringing the bill. In situations like these, I leave zero reward. Nowadays, with social media and review websites that show rankings, I believe, or at least hope, that restaurants are pushed more to give their best service. Personally, I prefer the tipping model that I have seen in Scandinavia and in some Asian countries where you are not supposed to tip or it may create offence. It removes the expectations that waiters may have and I am not pressured to calculate an appropriate gratuity. But it is what it is and as we say in Luxembourg, ‘andere Länder, andere Sitten’, meaning different countries have different customs.

Read more about Anouk’s life and travels on her lifestyle blog www.luxessed.com