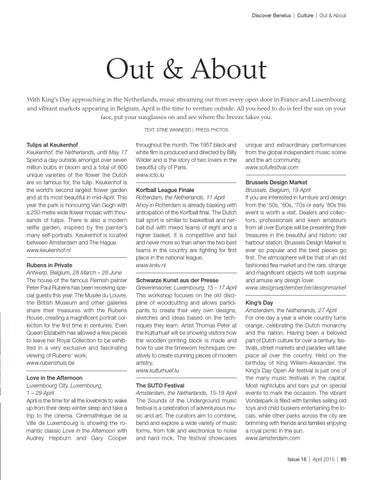 Discover Benelux | Culture | Out & About

Out & About With King’s Day approaching in the Netherlands, music streaming out from every open door in France and Luxembourg and vibrant markets appearing in Belgium, April is the time to venture outside. All you need to do is feel the sun on your face, put your sunglasses on and see where the breeze takes you. TEXT: STINE WANNEBO | PRESS PHOTOS

Tulips at Keukenhof Keukenhof, the Netherlands, until May 17 Spend a day outside amongst over seven million bulbs in bloom and a total of 800 unique varieties of the flower the Dutch are so famous for, the tulip. Keukenhof is the world’s second largest flower garden and at its most beautiful in mid-April. This year the park is honouring van Gogh with a 250-metre wide flower mosaic with thousands of tulips. There is also a modern selfie garden, inspired by the painter’s many self-portraits. Keukenhof is located between Amsterdam and The Hague. www.keukenhof.nl Rubens in Private Antwerp, Belgium, 28 March – 28 June The house of the famous Flemish painter Peter Paul Rubens has been receiving special guests this year. The Musée du Louvre, the British Museum and other galleries share their treasures with the Rubens House, creating a magnificent portrait collection for the first time in centuries. Even Queen Elizabeth has allowed a few pieces to leave her Royal Collection to be exhibited in a very exclusive and fascinating viewing of Rubens’ work. www.rubenshuis.be Love in the Afternoon Luxembourg City, Luxembourg, 1 – 29 April April is the time for all the lovebirds to wake up from their deep winter sleep and take a trip to the cinema. Cinémathèque de la ville de Luxembourg is showing the romantic classic Love in the Afternoon with Audrey Hepburn and Gary Cooper

throughout the month. The 1957 black and white film is produced and directed by Billy Wilder and is the story of two lovers in the beautiful city of Paris. www.lcto.lu Korfball League Finale Rotterdam, the Netherlands, 11 April Ahoy in Rotterdam is already basking with anticipation of the Korfball final. The Dutch ball sport is similar to basketball and netball but with mixed teams of eight and a higher basket. It is competitive and fast and never more so than when the two best teams in the country are fighting for first place in the national league. www.knkv.nl Schwarze Kunst aus der Presse Grevenmacher, Luxembourg, 15 – 17 April This workshop focuses on the old discipline of woodcutting and allows participants to create their very own designs, sketches and ideas based on the techniques they learn. Artist Thomas Peter at the Kulturhuef will be showing visitors how the wooden printing block is made and how to use the timeworn techniques creatively to create stunning pieces of modern artistry. www.kulturhuef.lu The SUTO Festival Amsterdam, the Netherlands, 15-19 April The Sounds of the Underground music festival is a celebration of adventurous music and art. The curators aim to combine, bend and explore a wide variety of music forms, from folk and electronica to noise and hard rock. The festival showcases

unique and extraordinary performances from the global independent music scene and the art community. www.sotufestival.com Brussels Design Market Brussels, Belgium, 19 April If you are interested in furniture and design from the ‘50s, ‘60s, ‘70s or early ‘80s this event is worth a visit. Dealers and collectors, professionals and keen amateurs from all over Europe will be presenting their treasures in the beautiful and historic old harbour station. Brussels Design Market is ever so popular and the best pieces go first. The atmosphere will be that of an old fashioned flea market and the rare, strange and magnificent objects will both surprise and amuse any design lover. www.designseptember.be/designmarket King’s Day Amsterdam, the Netherlands, 27 April For one day a year a whole country turns orange, celebrating the Dutch monarchy and the nation. Having been a beloved part of Dutch culture for over a century, festivals, street markets and parades will take place all over the country. Held on the birthday of King Willem-Alexander, the King’s Day Open Air festival is just one of the many music festivals in the capital. Most nightclubs and bars put on special events to mark the occasion. The vibrant vondelpark is filled with families selling old toys and child buskers entertaining the locals, while other parks across the city are brimming with friends and families enjoying a royal picnic in the sun. www.iamsterdam.com