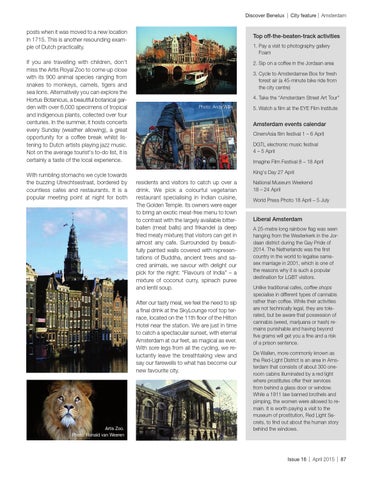 posts when it was moved to a new location in 1715. This is another resounding example of Dutch practicality. If you are travelling with children, don’t miss the Artis Royal Zoo to come up close with its 900 animal species ranging from snakes to monkeys, camels, tigers and sea lions. Alternatively you can explore the Hortus Botanicus, a beautiful botanical garden with over 6,000 specimens of tropical and indigenous plants, collected over four centuries. In the summer, it hosts concerts every Sunday (weather allowing), a great opportunity for a coffee break whilst listening to Dutch artists playing jazz music. Not on the average tourist's to-do list, it is certainly a taste of the local experience. With rumbling stomachs we cycle towards the buzzing Utrechtsestraat, bordered by countless cafes and restaurants. It is a popular meeting point at night for both

residents and visitors to catch up over a drink. We pick a colourful vegetarian restaurant specialising in Indian cuisine, The Golden Temple. Its owners were eager to bring an exotic meat-free menu to town to contrast with the largely available bitterballen (meat balls) and frikandel (a deep fried meaty mixture) that visitors can get in almost any cafe. Surrounded by beautifully painted walls covered with representations of Buddha, ancient trees and sacred animals, we savour with delight our pick for the night: “Flavours of India” – a mixture of coconut curry, spinach puree and lentil soup. After our tasty meal, we feel the need to sip a final drink at the SkyLounge roof top terrace, located on the 11th floor of the Hilton Hotel near the station. We are just in time to catch a spectacular sunset, with eternal Amsterdam at our feet, as magical as ever. With sore legs from all the cycling, we reluctantly leave the breathtaking view and say our farewells to what has become our new favourite city.

5. Watch a film at the EYE Film Institute

Liberal Amsterdam A 25-metre long rainbow flag was seen hanging from the Westerkerk in the Jordaan district during the Gay Pride of 2014. The Netherlands was the first country in the world to legalise samesex marriage in 2001, which is one of the reasons why it is such a popular destination for LGBT visitors. Unlike traditional cafes, coffee shops specialise in different types of cannabis rather than coffee. While their activities are not technically legal, they are tolerated, but be aware that possession of cannabis (weed, marijuana or hash) remains punishable and having beyond five grams will get you a fine and a risk of a prison sentence. De Wallen, more commonly known as the Red-Light District is an area in Amsterdam that consists of about 300 oneroom cabins illuminated by a red light where prostitutes offer their services from behind a glass door or window. While a 1911 law banned brothels and pimping, the women were allowed to remain. It is worth paying a visit to the museum of prostitution, Red Light Secrets, to find out about the human story behind the windows.