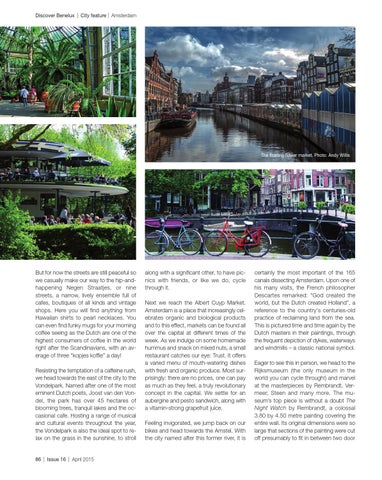 But for now the streets are still peaceful so we casually make our way to the hip-andhappening Negen Straatjes, or nine streets, a narrow, lively ensemble full of cafes, boutiques of all kinds and vintage shops. Here you will find anything from Hawaiian shirts to pearl necklaces. You can even find funky mugs for your morning coffee seeing as the Dutch are one of the highest consumers of coffee in the world right after the Scandinavians, with an average of three “kopjes koffie” a day! Resisting the temptation of a caffeine rush, we head towards the east of the city to the vondelpark. Named after one of the most eminent Dutch poets, Joost van den vondel, the park has over 45 hectares of blooming trees, tranquil lakes and the occasional cafe. Hosting a range of musical and cultural events throughout the year, the vondelpark is also the ideal spot to relax on the grass in the sunshine, to stroll

along with a significant other, to have picnics with friends, or like we do, cycle through it. Next we reach the Albert Cuyp Market. Amsterdam is a place that increasingly celebrates organic and biological products and to this effect, markets can be found all over the capital at different times of the week. As we indulge on some homemade hummus and snack on mixed nuts, a small restaurant catches our eye: Trust. It offers a varied menu of mouth-watering dishes with fresh and organic produce. Most surprisingly: there are no prices, one can pay as much as they feel, a truly revolutionary concept in the capital. We settle for an aubergine and pesto sandwich, along with a vitamin-strong grapefruit juice. Feeling invigorated, we jump back on our bikes and head towards the Amstel. With the city named after this former river, it is

certainly the most important of the 165 canals dissecting Amsterdam. Upon one of his many visits, the French philosopher Descartes remarked: “God created the world, but the Dutch created Holland”, a reference to the country's centuries-old practice of reclaiming land from the sea. This is pictured time and time again by the Dutch masters in their paintings, through the frequent depiction of dykes, waterways and windmills – a classic national symbol. Eager to see this in person, we head to the Rijksmuseum (the only museum in the world you can cycle through!) and marvel at the masterpieces by Rembrandt, vermeer, Steen and many more. The museum’s top piece is without a doubt The Night Watch by Rembrandt, a colossal 3.80 by 4.50 metre painting covering the entire wall. Its original dimensions were so large that sections of the painting were cut off presumably to fit in between two door