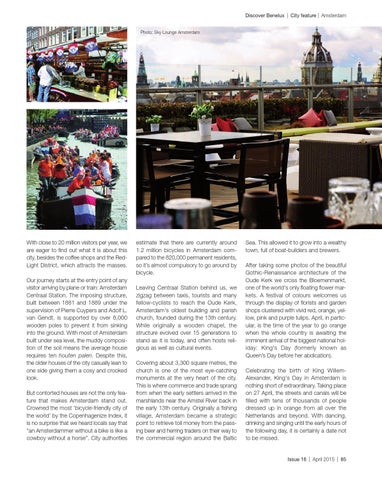 With close to 20 million visitors per year, we are eager to find out what it is about this city, besides the coffee shops and the RedLight District, which attracts the masses. Our journey starts at the entry point of any visitor arriving by plane or train: Amsterdam Centraal Station. The imposing structure, built between 1881 and 1889 under the supervision of Pierre Cuypers and Adolf L. van Gendt, is supported by over 8,000 wooden poles to prevent it from sinking into the ground. With most of Amsterdam built under sea level, the muddy composition of the soil means the average house requires ten houten palen. Despite this, the older houses of the city casually lean to one side giving them a cosy and crooked look. But contorted houses are not the only feature that makes Amsterdam stand out. Crowned the most ‘bicycle-friendly city of the world’ by the Copenhagenize Index, it is no surprise that we heard locals say that “an Amsterdammer without a bike is like a cowboy without a horse”. City authorities

estimate that there are currently around 1.2 million bicycles in Amsterdam compared to the 820,000 permanent residents, so it’s almost compulsory to go around by bicycle. Leaving Centraal Station behind us, we zigzag between taxis, tourists and many fellow-cyclists to reach the Oude Kerk, Amsterdam's oldest building and parish church, founded during the 13th century. While originally a wooden chapel, the structure evolved over 15 generations to stand as it is today, and often hosts religious as well as cultural events. Covering about 3,300 square metres, the church is one of the most eye-catching monuments at the very heart of the city. This is where commerce and trade sprang from when the early settlers arrived in the marshlands near the Amstel River back in the early 13th century. Originally a fishing village, Amsterdam became a strategic point to retrieve toll money from the passing beer and herring traders on their way to the commercial region around the Baltic

Sea. This allowed it to grow into a wealthy town, full of boat-builders and brewers. After taking some photos of the beautiful Gothic-Renaissance architecture of the Oude Kerk we cross the Bloemenmarkt, one of the world's only floating flower markets. A festival of colours welcomes us through the display of florists and garden shops clustered with vivid red, orange, yellow, pink and purple tulips. April, in particular, is the time of the year to go orange when the whole country is awaiting the imminent arrival of the biggest national holiday: King's Day (formerly known as Queen’s Day before her abdication). Celebrating the birth of King WillemAlexander, King's Day in Amsterdam is nothing short of extraordinary. Taking place on 27 April, the streets and canals will be filled with tens of thousands of people dressed up in orange from all over the Netherlands and beyond. With dancing, drinking and singing until the early hours of the following day, it is certainly a date not to be missed.