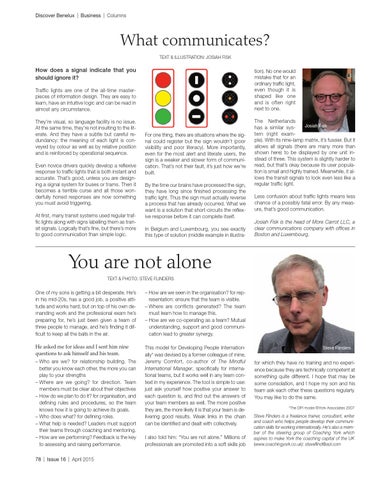 How does a signal indicate that you should ignore it?

tion). No one would mistake that for an ordinary traffic light, even though it is shaped like one and is often right next to one.

Traffic lights are one of the all-time masterpieces of information design. They are easy to learn, have an intuitive logic and can be read in almost any circumstance. They’re visual, so language facility is no issue. At the same time, they’re not insulting to the literate. And they have a subtle but careful redundancy: the meaning of each light is conveyed by colour as well as by relative position and is reinforced by operational sequence. Even novice drivers quickly develop a reflexive response to traffic lights that is both instant and accurate. That’s good, unless you are designing a signal system for buses or trams. Then it becomes a terrible curse and all those wonderfully honed responses are now something you must avoid triggering. At first, many transit systems used regular traffic lights along with signs labelling them as transit signals. Logically that’s fine, but there’s more to good communication than simple logic.

For one thing, there are situations where the signal could register but the sign wouldn’t (poor visibility and poor literacy). More importantly, even for the most alert and literate users, the sign is a weaker and slower form of communication. That’s not their fault, it’s just how we’re built. By the time our brains have processed the sign, they have long since finished processing the traffic light. Thus the sign must actually reverse a process that has already occurred. What we want is a solution that short-circuits the reflexive response before it can complete itself. In Belgium and Luxembourg, you see exactly this type of solution (middle example in illustra-

The Netherlands Josiah Fisk has a similar system (right example). With its nine-lamp matrix, it’s fussier. But it allows all signals (there are many more than shown here) to be displayed by one unit instead of three. This system is slightly harder to read, but that’s okay because its user population is small and highly trained. Meanwhile, it allows the transit signals to look even less like a regular traffic light. Less confusion about traffic lights means less chance of a possibly fatal error. By any measure, that’s good communication. Josiah Fisk is the head of More Carrot LLC, a clear communications company with offices in Boston and Luxembourg.

You are not alone TEXT & PHOTO: STEvE FLINDERS

One of my sons is getting a bit desperate. He’s in his mid-20s, has a good job, a positive attitude and works hard, but on top of his own demanding work and the professional exam he’s preparing for, he’s just been given a team of three people to manage, and he’s finding it difficult to keep all the balls in the air.

– How are we seen in the organisation? for representation: ensure that the team is visible. – Where are conflicts generated? The team must learn how to manage this. – How are we co-operating as a team? Mutual understanding, support and good communication lead to greater synergy.

He asked me for ideas and I sent him nine questions to ask himself and his team.

This model for Developing People Internationally* was devised by a former colleague of mine, Jeremy Comfort, co-author of The Mindful International Manager, specifically for international teams, but it works well in any team context in my experience. The tool is simple to use: just ask yourself how positive your answer to each question is, and find out the answers of your team members as well. The more positive they are, the more likely it is that your team is delivering good results. Weak links in the chain can be identified and dealt with collectively.

– Who are we? for relationship building. The better you know each other, the more you can play to your strengths – Where are we going? for direction. Team members must be clear about their objectives – How do we plan to do it? for organisation, and defining rules and procedures, so the team knows how it is going to achieve its goals. – Who does what? for defining roles. – What help is needed? Leaders must support their teams through coaching and mentoring. – How are we performing? Feedback is the key to assessing and raising performance. 78 | Issue 16 | April 2015

I also told him: “You are not alone.” Millions of professionals are promoted into a soft skills job

for which they have no training and no experience because they are technically competent at something quite different. I hope that may be some consolation, and I hope my son and his team ask each other these questions regularly. You may like to do the same. *The DPI model ©York Associates 2007

Steve Flinders is a freelance trainer, consultant, writer and coach who helps people develop their communication skills for working internationally. He’s also a member of the steering group of Coaching York which aspires to make York the coaching capital of the UK (www.coachingyork.co.uk): steveflind@aol.com