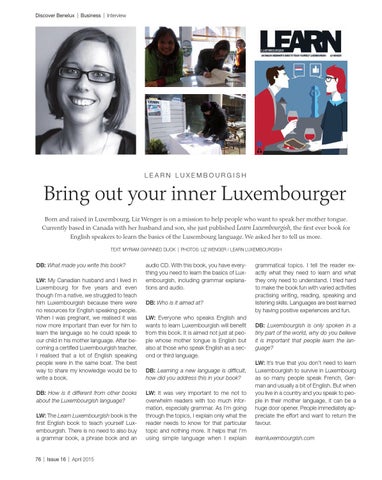 Bring out your inner Luxembourger Born and raised in Luxembourg, Liz Wenger is on a mission to help people who want to speak her mother tongue. Currently based in Canada with her husband and son, she just published Learn Luxembourgish, the first ever book for English speakers to learn the basics of the Luxembourg language. We asked her to tell us more. TEXT: MYRIAM GWYNNED DIJCK | PHOTOS: LIZ WENGER / LEARN LUXEMBOURGISH

DB: What made you write this book? LW: My Canadian husband and I lived in Luxembourg for five years and even though I’m a native, we struggled to teach him Luxembourgish because there were no resources for English speaking people. When I was pregnant, we realised it was now more important than ever for him to learn the language so he could speak to our child in his mother language. After becoming a certified Luxembourgish teacher, I realised that a lot of English speaking people were in the same boat. The best way to share my knowledge would be to write a book. DB: How is it different from other books about the Luxembourgish language? LW: The Learn Luxembourgish book is the first English book to teach yourself Luxembourgish. There is no need to also buy a grammar book, a phrase book and an

audio CD. With this book, you have everything you need to learn the basics of Luxembourgish, including grammar explanations and audio. DB: Who is it aimed at? LW: Everyone who speaks English and wants to learn Luxembourgish will benefit from this book. It is aimed not just at people whose mother tongue is English but also at those who speak English as a second or third language. DB: Learning a new language is difficult, how did you address this in your book? LW: It was very important to me not to overwhelm readers with too much information, especially grammar. As I’m going through the topics, I explain only what the reader needs to know for that particular topic and nothing more. It helps that I’m using simple language when I explain

grammatical topics. I tell the reader exactly what they need to learn and what they only need to understand. I tried hard to make the book fun with varied activities practising writing, reading, speaking and listening skills. Languages are best learned by having positive experiences and fun. DB: Luxembourgish is only spoken in a tiny part of the world, why do you believe it is important that people learn the language? LW: It’s true that you don’t need to learn Luxembourgish to survive in Luxembourg as so many people speak French, German and usually a bit of English. But when you live in a country and you speak to people in their mother language, it can be a huge door opener. People immediately appreciate the effort and want to return the favour. learnluxembourgish.com