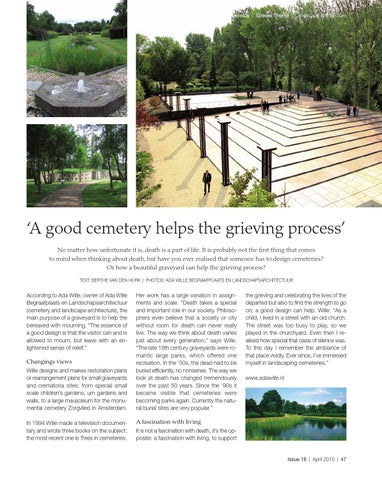 ‘A good cemetery helps the grieving process’ No matter how unfortunate it is, death is a part of life. It is probably not the first thing that comes to mind when thinking about death, but have you ever realised that someone has to design cemeteries? Or how a beautiful graveyard can help the grieving process? TEXT: BERTHE vAN DEN HURK | PHOTOS: ADA WILLE BEGRAAFPLAATS EN LANDSCHAPSARCHITECTUUR

According to Ada Wille, owner of Ada Wille Begraafplaats en Landschapsarchitectuur (cemetery and landscape architecture), the main purpose of a graveyard is to help the bereaved with mourning. “The essence of a good design is that the visitor can and is allowed to mourn, but leave with an enlightened sense of relief.”

Changings views Wille designs and makes restoration plans or rearrangement plans for small graveyards and crematoria sites; from special small scale children’s gardens, urn gardens and walls, to a large mausoleum for the monumental cemetery Zorgvlied in Amsterdam. In 1994 Wille made a television documentary and wrote three books on the subject; the most recent one is Trees in cemeteries.

Her work has a large variation in assignments and scale. “Death takes a special and important role in our society. Philosophers even believe that a society or city without room for death can never really live. The way we think about death varies just about every generation,” says Wille. “The late 19th century graveyards were romantic large parks, which offered one recreation. In the ’50s, the dead had to be buried efficiently, no nonsense. The way we look at death has changed tremendously over the past 50 years. Since the ’90s it became visible that cemeteries were becoming parks again. Currently the natural burial sites are very popular.”

the grieving and celebrating the lives of the departed but also to find the strength to go on; a good design can help. Wille: “As a child, I lived in a street with an old church. The street was too busy to play, so we played in the churchyard. Even then I realised how special that oasis of silence was. To this day I remember the ambiance of that place vividly. Ever since, I’ve immersed myself in landscaping cemeteries.” www.adawille.nl