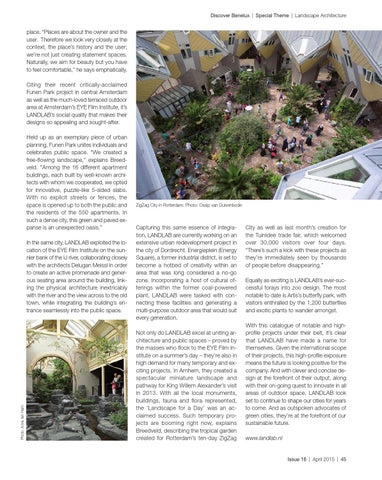 place. “Places are about the owner and the user. Therefore we look very closely at the context, the place’s history and the user; we’re not just creating statement spaces. Naturally, we aim for beauty but you have to feel comfortable,” he says emphatically. Citing their recent critically-acclaimed Funen Park project in central Amsterdam as well as the much-loved terraced outdoor area at Amsterdam’s EYE Film Institute, it’s LANDLAB’s social quality that makes their designs so appealing and sought-after. Held up as an exemplary piece of urban planning, Funen Park unites individuals and celebrates public space. “We created a free-flowing landscape,” explains Breedveld. “Among the 16 different apartment buildings, each built by well-known architects with whom we cooperated, we opted for innovative, puzzle-like 5-sided slabs. With no explicit streets or fences, the space is opened up to both the public and the residents of the 550 apartments. In such a dense city, this green and paved expanse is an unexpected oasis.”

In the same city, LANDLAB exploited the location of the EYE Film Institute on the sunnier bank of the IJ river, collaborating closely with the architects Delugan Meissl in order to create an active promenade and generous seating area around the building, linking the physical architecture inextricably with the river and the view across to the old town, while integrating the building’s entrance seamlessly into the public space.

Capturing this same essence of integration, LANDLAB are currently working on an extensive urban redevelopment project in the city of Dordrecht. Energieplein (Energy Square), a former industrial district, is set to become a hotbed of creativity within an area that was long considered a no-go zone. Incorporating a host of cultural offerings within the former coal-powered plant, LANDLAB were tasked with connecting these facilities and generating a multi-purpose outdoor area that would suit every generation. Not only do LANDLAB excel at uniting architecture and public spaces – proved by the masses who flock to the EYE Film Institute on a summer’s day – they’re also in high demand for many temporary and exciting projects. In Arnhem, they created a spectacular miniature landscape and pathway for King Willem Alexander’s visit in 2013. With all the local monuments, buildings, fauna and flora represented, the ‘Landscape for a Day’ was an acclaimed success. Such temporary projects are booming right now, explains Breedveld, describing the tropical garden created for Rotterdam’s ten-day ZigZag

City as well as last month’s creation for the TuinIdee trade fair, which welcomed over 30,000 visitors over four days. “There’s such a kick with these projects as they’re immediately seen by thousands of people before disappearing.” Equally as exciting is LANDLAB’s ever-successful forays into zoo design. The most notable to date is Artis’s butterfly park, with visitors enthralled by the 1,200 butterflies and exotic plants to wander amongst. With this catalogue of notable and highprofile projects under their belt, it’s clear that LANDLAB have made a name for themselves. Given the international scope of their projects, this high-profile exposure means the future is looking positive for the company. And with clever and concise design at the forefront of their output, along with their on-going quest to innovate in all areas of outdoor space, LANDLAB look set to continue to shape our cities for years to come. And as outspoken advocates of green cities, they’re at the forefront of our sustainable future. www.landlab.nl