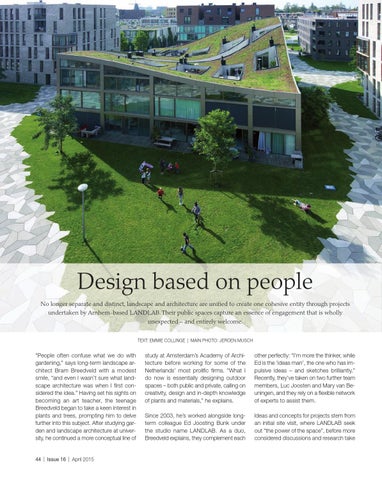 Design based on people No longer separate and distinct, landscape and architecture are unified to create one cohesive entity through projects undertaken by Arnhem-based LANDLAB. Their public spaces capture an essence of engagement that is wholly unexpected – and entirely welcome. TEXT: EMMIE COLLINGE | MAIN PHOTO: JEROEN MUSCH

“People often confuse what we do with gardening,” says long-term landscape architect Bram Breedveld with a modest smile, “and even I wasn’t sure what landscape architecture was when I first considered the idea.” Having set his sights on becoming an art teacher, the teenage Breedveld began to take a keen interest in plants and trees, prompting him to delve further into this subject. After studying garden and landscape architecture at university, he continued a more conceptual line of

study at Amsterdam’s Academy of Architecture before working for some of the Netherlands’ most prolific firms. “What I do now is essentially designing outdoor spaces – both public and private, calling on creativity, design and in-depth knowledge of plants and materials,” he explains.

other perfectly: “I’m more the thinker, while Ed is the ‘ideas man’, the one who has impulsive ideas – and sketches brilliantly.” Recently, they’ve taken on two further team members, Luc Joosten and Mary van Beuningen, and they rely on a flexible network of experts to assist them.

Since 2003, he’s worked alongside longterm colleague Ed Joosting Bunk under the studio name LANDLAB. As a duo, Breedveld explains, they complement each

Ideas and concepts for projects stem from an initial site visit, where LANDLAB seek out “the power of the space”, before more considered discussions and research take