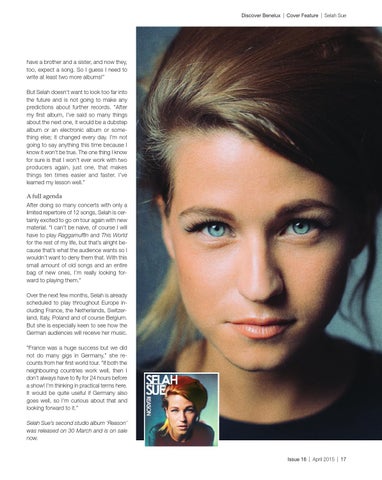 have a brother and a sister, and now they, too, expect a song. So I guess I need to write at least two more albums!” But Selah doesn’t want to look too far into the future and is not going to make any predictions about further records. “After my first album, I’ve said so many things about the next one, it would be a dubstep album or an electronic album or something else; it changed every day. I’m not going to say anything this time because I know it won’t be true. The one thing I know for sure is that I won’t ever work with two producers again, just one, that makes things ten times easier and faster. I’ve learned my lesson well.”

A full agenda After doing so many concerts with only a limited repertoire of 12 songs, Selah is certainly excited to go on tour again with new material. “I can’t be naive, of course I will have to play Raggamuffin and This World for the rest of my life, but that’s alright because that’s what the audience wants so I wouldn’t want to deny them that. With this small amount of old songs and an entire bag of new ones, I’m really looking forward to playing them.” Over the next few months, Selah is already scheduled to play throughout Europe including France, the Netherlands, Switzerland, Italy, Poland and of course Belgium. But she is especially keen to see how the German audiences will receive her music. “France was a huge success but we did not do many gigs in Germany,” she recounts from her first world tour. “If both the neighbouring countries work well, then I don’t always have to fly for 24 hours before a show! I’m thinking in practical terms here. It would be quite useful if Germany also goes well, so I’m curious about that and looking forward to it.” Selah Sue’s second studio album ‘Reason’ was released on 30 March and is on sale now.