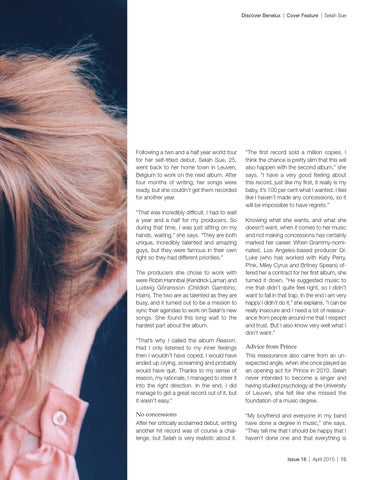 Following a two and a half year world tour for her self-titled debut, Selah Sue, 25, went back to her home town in Leuven, Belgium to work on the next album. After four months of writing, her songs were ready, but she couldn’t get them recorded for another year. “That was incredibly difficult. I had to wait a year and a half for my producers. So during that time, I was just sitting on my hands, waiting,” she says. “They are both unique, incredibly talented and amazing guys, but they were famous in their own right so they had different priorities.” The producers she chose to work with were Robin Hannibal (Kendrick Lamar) and Ludwig Göransson (Childish Gambino, Haim). The two are as talented as they are busy, and it turned out to be a mission to sync their agendas to work on Selah’s new songs. She found this long wait to the hardest part about the album. “That’s why I called the album Reason. Had I only listened to my inner feelings then I wouldn’t have coped, I would have ended up crying, screaming and probably would have quit. Thanks to my sense of reason, my rationale, I managed to steer it into the right direction. In the end, I did manage to get a great record out of it, but it wasn’t easy.”

No concessions After her critically acclaimed debut, writing another hit record was of course a challenge, but Selah is very realistic about it.

“The first record sold a million copies. I think the chance is pretty slim that this will also happen with the second album,” she says. “I have a very good feeling about this record, just like my first, it really is my baby, it’s 100 per cent what I wanted. I feel like I haven’t made any concessions, so it will be impossible to have regrets.” Knowing what she wants, and what she doesn’t want, when it comes to her music and not making concessions has certainly marked her career. When Grammy-nominated, Los Angeles-based producer Dr. Luke (who has worked with Katy Perry, P!nk, Miley Cyrus and Britney Spears) offered her a contract for her first album, she turned it down. “He suggested music to me that didn’t quite feel right, so I didn’t want to fall in that trap. In the end I am very happy I didn’t do it,” she explains. “I can be really insecure and I need a lot of reassurance from people around me that I respect and trust. But I also know very well what I don’t want.”

Advice from Prince This reassurance also came from an unexpected angle, when she once played as an opening act for Prince in 2010. Selah never intended to become a singer and having studied psychology at the University of Leuven, she felt like she missed the foundation of a music degree. “My boyfriend and everyone in my band have done a degree in music,” she says. “They tell me that I should be happy that I haven’t done one and that everything is