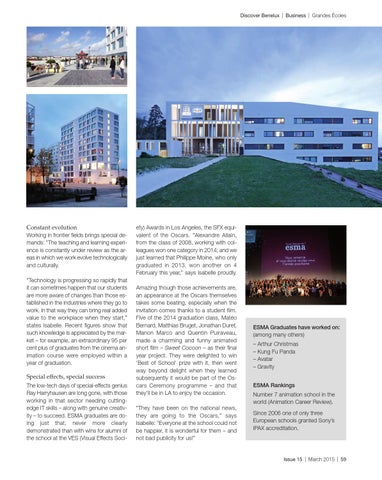 Constant evolution Working in frontier fields brings special demands: “The teaching and learning experience is constantly under review as the areas in which we work evolve technologically and culturally. “Technology is progressing so rapidly that it can sometimes happen that our students are more aware of changes than those established in the industries where they go to work. In that way they can bring real added value to the workplace when they start,” states Isabelle. recent figures show that such knowledge is appreciated by the market – for example, an extraordinary 95 per cent plus of graduates from the cinema animation course were employed within a year of graduation.

Special effects, special success The low-tech days of special-effects genius ray Harryhausen are long gone, with those working in that sector needing cuttingedge IT skills – along with genuine creativity – to succeed. ESMA graduates are doing just that, never more clearly demonstrated than with wins for alumni of the school at the VES (Visual Effects Soci-

ety) Awards in Los Angeles, the SFX equivalent of the Oscars. “Alexandre Allain, from the class of 2008, working with colleagues won one category in 2014; and we just learned that Philippe Moine, who only graduated in 2013, won another on 4 February this year,” says Isabelle proudly. Amazing though those achievements are, an appearance at the Oscars themselves takes some beating, especially when the invitation comes thanks to a student film. Five of the 2014 graduation class, Matéo Bernard, Matthias Bruget, Jonathan Duret, Manon Marco and Quentin Puiraveau, made a charming and funny animated short film – Sweet Cocoon – as their final year project. They were delighted to win ‘Best of School’ prize with it, then went way beyond delight when they learned subsequently it would be part of the Oscars Ceremony programme – and that they’ll be in LA to enjoy the occasion. “They have been on the national news, they are going to the Oscars,” says Isabelle: “Everyone at the school could not be happier, it is wonderful for them – and not bad publicity for us!”