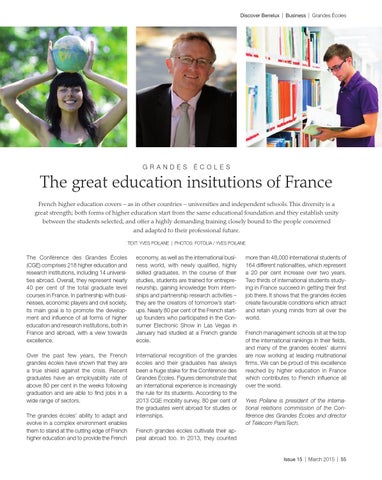 The great education insitutions of France French higher education covers – as in other countries – universities and independent schools. This diversity is a great strength; both forms of higher education start from the same educational foundation and they establish unity between the students selected, and offer a highly demanding training closely bound to the people concerned and adapted to their professional future. TEXT: YVES POILANE | PHOTOS: FOTOLIA / YVES POILANE

The Conférence des Grandes écoles (CGE) comprises 218 higher education and research institutions, including 14 universities abroad. Overall, they represent nearly 40 per cent of the total graduate level courses in France. In partnership with businesses, economic players and civil society, its main goal is to promote the development and influence of all forms of higher education and research institutions, both in France and abroad, with a view towards excellence.

economy, as well as the international business world, with newly qualified, highly skilled graduates. In the course of their studies, students are trained for entrepreneurship, gaining knowledge from internships and partnership research activities – they are the creators of tomorrow’s startups. Nearly 80 per cent of the French startup founders who participated in the Consumer Electronic Show in Las Vegas in January had studied at a French grande école.

Over the past few years, the French grandes écoles have shown that they are a true shield against the crisis. recent graduates have an employability rate of above 80 per cent in the weeks following graduation and are able to find jobs in a wide range of sectors.

International recognition of the grandes écoles and their graduates has always been a huge stake for the Conférence des Grandes écoles. Figures demonstrate that an international experience is increasingly the rule for its students. According to the 2013 CGE mobility survey, 80 per cent of the graduates went abroad for studies or internships.

more than 48,000 international students of 164 different nationalities, which represent a 20 per cent increase over two years. Two thirds of international students studying in France succeed in getting their first job there. It shows that the grandes écoles create favourable conditions which attract and retain young minds from all over the world. French management schools sit at the top of the international rankings in their fields, and many of the grandes écoles’ alumni are now working at leading multinational firms. We can be proud of this excellence reached by higher education in France which contributes to French influence all over the world. Yves Poilane is president of the international relations commission of the Conférence des Grandes Écoles and director of Télécom ParisTech.

French grandes écoles cultivate their appeal abroad too. In 2013, they counted