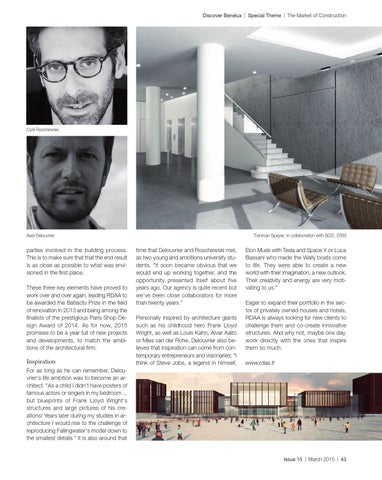 parties involved in the building process. This is to make sure that that the end result is as close as possible to what was envisioned in the first place. These three key elements have proved to work over and over again, leading rDAA to be awarded the Batiactu Prize in the field of renovation in 2013 and being among the finalists of the prestigious Paris Shop Design Award of 2014. As for now, 2015 promises to be a year full of new projects and developments, to match the ambitions of the architectural firm.

Tishman Speyer, in collaboration with SCO, 2009

time that Delouvrier and roschewski met, as two young and ambitions university students. &quot;It soon became obvious that we would end up working together, and the opportunity presented itself about five years ago. Our agency is quite recent but we&#39;ve been close collaborators for more than twenty years.&quot; Personally inspired by architecture giants such as his childhood hero Frank Lloyd Wright, as well as Louis Kahn, Alvar Aalto or Mies van der rohe, Delouvrier also believes that inspiration can come from contemporary entrepreneurs and visionaries: &quot;I think of Steve Jobs, a legend in himself,

Elon Musk with Tesla and Space X or Luca Bassani who made the Wally boats come to life. They were able to create a new world with their imagination, a new outlook. Their creativity and energy are very motivating to us.â&amp;#x20AC;? Eager to expand their portfolio in the sector of privately owned houses and hotels, rDAA is always looking for new clients to challenge them and co-create innovative structures. And why not, maybe one day, work directly with the ones that inspire them so much. www.rdaa.fr

For as long as he can remember, Delouvrier&#39;s life ambition was to become an architect. &quot;As a child I didn&#39;t have posters of famous actors or singers in my bedroom ... but blueprints of Frank Lloyd Wright&#39;s structures and large pictures of his creations! Years later during my studies in architecture I would rise to the challenge of reproducing Fallingwater&#39;s model down to the smallest details.&quot; It is also around that