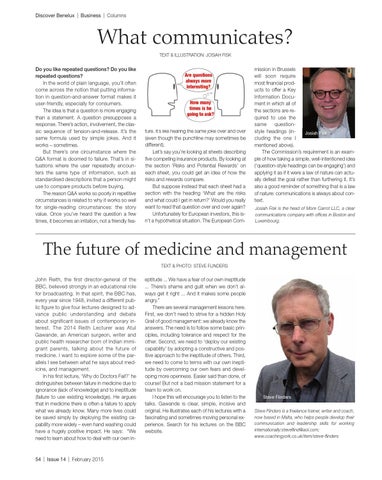 Do you like repeated questions? Do you like repeated questions? In the world of plain language, you’ll often come across the notion that putting information in question-and-answer format makes it user-friendly, especially for consumers. The idea is that a question is more engaging than a statement. A question presupposes a response. There’s action, involvement, the classic sequence of tension-and-release. It’s the same formula used by simple jokes. And it works – sometimes. But there’s one circumstance where the Q&A format is doomed to failure. That’s in situations where the user repeatedly encounters the same type of information, such as standardised descriptions that a person might use to compare products before buying. The reason Q&A works so poorly in repetitive circumstances is related to why it works so well for single-reading circumstances: the story value. Once you’ve heard the question a few times, it becomes an irritation, not a friendly fea-

ture. It’s like hearing the same joke over and over (even though the punchline may sometimes be different). Let’s say you’re looking at sheets describing five competing insurance products. By looking at the section ‘Risks and Potential Rewards’ on each sheet, you could get an idea of how the risks and rewards compare. But suppose instead that each sheet had a section with the heading ‘What are the risks and what could I get in return?’ Would you really want to read that question over and over again? Unfortunately for European investors, this isn’t a hypothetical situation. The European Com-

mission in Brussels will soon require most financial products to offer a Key Information Document in which all of the sections are required to use the same questionstyle headings (inJosiah Fisk cluding the one I mentioned above). The Commission’s requirement is an example of how taking a simple, well-intentioned idea (‘question-style headings can be engaging’) and applying it as if it were a law of nature can actually defeat the goal rather than furthering it. It’s also a good reminder of something that is a law of nature: communications is always about context. Josiah Fisk is the head of More Carrot LLC, a clear communications company with offices in Boston and Luxembourg.

The future of medicine and management TEXT & PHOTO: STEVE FLINDERS

John  Reith,  the  first  director-general  of  the BBC, believed strongly in an educational role for broadcasting. In that spirit, the BBC has, every year since 1948, invited a different public figure to give four lectures designed to advance  public  understanding  and  debate about significant issues of contemporary interest.  The  2014  Reith  Lecturer  was  Atul Gawande,  an  American  surgeon,  writer  and public health researcher born of Indian immigrant  parents,  talking  about  the  future  of medicine. I want to explore some of the parallels I see between what he says about medicine, and management. In his first lecture, ‘Why do Doctors Fail?’ he distinguishes between failure in medicine due to ignorance (lack of knowledge) and to ineptitude (failure  to  use  existing  knowledge).  He  argues that in medicine there is often a failure to apply what we already know. Many more lives could be saved simply by deploying the existing capability more widely – even hand washing could have  a  hugely  positive  impact.  He  says:    “We need to learn about how to deal with our own in-

eptitude ... We have a fear of our own ineptitude ... There’s shame and guilt when we don’t always get it right ... And it makes some people angry.” There are several management lessons here. First, we don’t need to strive for a hidden Holy Grail of good management: we already know the answers. The need is to follow some basic principles, including tolerance and respect for the other. Second, we need to ‘deploy our existing capability’ by adopting a constructive and positive approach to the ineptitude of others. Third, we need to come to terms with our own ineptitude by overcoming our own fears and developing more openness. Easier said than done, of course! But not a bad mission statement for a team to work on. I hope this will encourage you to listen to the talks.  Gawande  is  clear,  simple,  incisive  and original. He illustrates each of his lectures with a fascinating and sometimes moving personal experience.  Search  for  his  lectures  on  the  BBC website.

Steve Flinders Steve Flinders is a freelance trainer, writer and coach, now based in Malta, who helps people develop their communication and leadership skills for working internationally:steveflind@aol.com; www.coachingyork.co.uk/item/steve-flinders