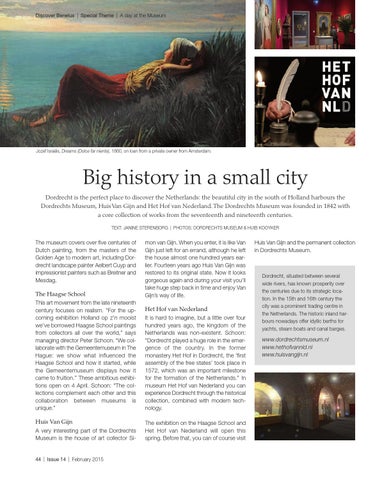 Big history in a small city Dordrecht is the perfect place to discover the Netherlands: the beautiful city in the south of Holland harbours the Dordrechts Museum, Huis Van Gijn and Het Hof van Nederland. The Dordrechts Museum was founded in 1842 with a core collection of works from the seventeenth and nineteenth centuries. TEXT: JANINE STERENBORG  |  PHOTOS: DORDRECHTS MUSEUM & HUIB KOOYKER

The museum covers over five centuries of Dutch  painting,  from  the  masters  of  the Golden Age to modern art, including Dordrecht landscape painter Aelbert Cuyp and impressionist painters such as Breitner and Mesdag.

The Haagse School This art movement from the late nineteenth century  focuses  on  realism.  “For  the  upcoming  exhibition  Holland  op  z’n  mooist we’ve borrowed Haagse School paintings from  collectors  all  over  the  world,”  says managing director Peter Schoon. “We collaborate with the Gemeentemuseum in The Hague:  we  show  what  influenced  the Haagse School and how it started, while the  Gemeentemuseum  displays  how  it came to fruition.’’ These ambitious exhibitions open on 4 April. Schoon: “The collections complement each other and this collaboration  between  museums  is unique.”

mon van Gijn. When you enter, it is like Van Gijn just left for an errand, although he left the house almost one hundred years earlier. Fourteen years ago Huis Van Gijn was restored to its original state. Now it looks gorgeous again and during your visit you’ll take huge step back in time and enjoy Van Gijn’s way of life.

Het Hof van Nederland It is hard to imagine, but a little over four hundred  years  ago,  the  kingdom  of  the Netherlands  was  non-existent.  Schoon: “Dordrecht played a huge role in the emergence  of  the  country.  In  the  former monastery Het Hof in Dordrecht, the ‘first assembly of the free states’ took place in 1572, which was an important milestone for  the  formation  of  the  Netherlands.”  In museum Het Hof van Nederland you can experience Dordrecht through the historical collection,  combined  with  modern  technology.   The exhibition on the Haagse School and Het  Hof  van  Nederland  will  open  this spring. Before that, you can of course visit

Huis Van Gijn and the permanent collection in Dordrechts Museum.

Dordrecht, situated between several wide rivers, has known prosperity over the centuries due to its strategic location. In the 15th and 16th century the city was a prominent trading centre in the Netherlands. The historic inland harbours nowadays offer idyllic berths for yachts, steam boats and canal barges.