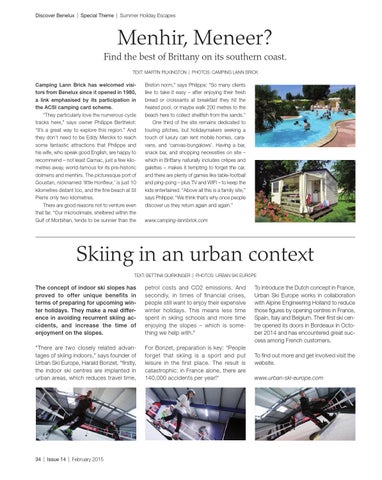 Camping Lann Brick has welcomed visitors from Benelux since it opened in 1980, a link emphasised by its participation in the ACSI camping card scheme. “They particularly love the numerous cycle tracks here,” says owner Philippe Berthelot: “It’s a great way to explore this region.” And they don’t need to be Eddy Merckx to reach some fantastic attractions that Philippe and his wife, who speak good English, are happy to recommend – not least Carnac, just a few kilometres away, world-famous for its pre-historic

Breton norm,” says Philippe: “So many clients like to take it easy – after enjoying their fresh bread or croissants at breakfast they hit the heated pool, or maybe walk 200 metres to the beach here to collect shellfish from the sands.” One third of the site remains dedicated to touring pitches, but holidaymakers seeking a touch of luxury can rent mobile homes, caravans, and ‘canvas-bungalows’. Having a bar, snack bar, and shopping necessities on site – which in Brittany naturally includes crêpes and galettes – makes it tempting to forget the car,

dolmens and menhirs. The picturesque port of Goustan, nicknamed ‘little Honfleur,’ is just 10 kilometres distant too, and the fine beach at St Pierre only two kilometres. There are good reasons not to venture even that far. “Our microclimate, sheltered within the Gulf of Morbihan, tends to be sunnier than the

and there are plenty of games like table-football and ping-pong – plus TV and WIFI – to keep the kids entertained. “Above all this is a family site,” says Philippe: “We think that’s why once people discover us they return again and again.” www.camping-lannbrick.com

The concept of indoor ski slopes has proved to offer unique benefits in terms of preparing for upcoming winter holidays. They make a real difference in avoiding recurrent skiing accidents, and increase the time of enjoyment on the slopes.

petrol costs and CO2 emissions. And secondly, in times of financial crises, people still want to enjoy their expensive winter holidays. This means less time spent in skiing schools and more time enjoying the slopes – which is something we help with."

For Bonzet, preparation is key: "People forget that skiing is a sport and put leisure in the first place. The result is catastrophic: in France alone, there are 140,000 accidents per year!"

To introduce the Dutch concept in France, Urban Ski Europe works in collaboration with Alpine Engineering Holland to reduce those figures by opening centres in France, Spain, Italy and Belgium. Their first ski centre opened its doors in Bordeaux in October 2014 and has encountered great success among French customers. To find out more and get involved visit the website. www.urban-ski-europe.com