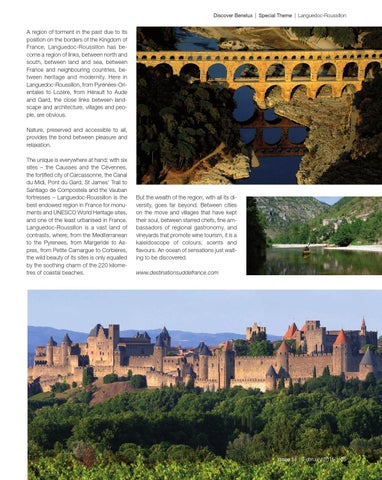 A region of torment in the past due to its position on the borders of the Kingdom of France,  Languedoc-Roussillon  has  become a region of links, between north and south,  between  land  and  sea,  between France  and  neighbouring  countries,  between  heritage  and  modernity.  Here  in Languedoc-Roussillon, from Pyrénées-Orientales  to  Lozère,  from  Hérault  to  Aude and  Gard,  the  close  links  between  landscape and architecture, villages and people, are obvious. Nature,  preserved  and  accessible  to  all, provides the bond between pleasure and relaxation. The unique is everywhere at hand: with six sites  –  the  Causses  and  the  Cévennes, the fortified city of Carcassonne, the Canal du Midi, Pont du Gard, St James’ Trail to Santiago de Compostela and the Vauban fortresses  –  Languedoc-Roussillon  is  the best endowed region in France for monuments and UNESCO World Heritage sites, and one of the least urbanised in France. Languedoc-Roussillon  is  a  vast  land  of contrasts, where, from the Mediterranean to  the  Pyrenees,  from  Margeride  to  Aspres, from Petite Camargue to Corbières, the wild beauty of its sites is only equalled by the soothing charm of the 220 kilometres of coastal beaches.

But the wealth of the region, with all its diversity,  goes  far  beyond.  Between  cities on  the  move  and  villages  that  have  kept their soul, between starred chefs, fine ambassadors  of  regional  gastronomy,  and vineyards that promote wine tourism, it is a kaleidoscope  of  colours,  scents  and flavours. An ocean of sensations just waiting to be discovered. www.destinationsuddefrance.com