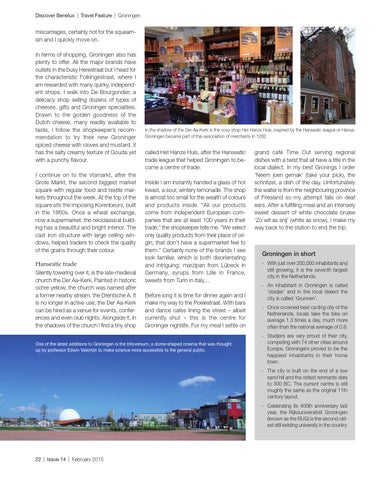 miscarriages, certainly not for the squeamish and I quickly move on. In terms of shopping, Groningen also has plenty to offer. All the major brands have outlets in the busy Herestraat but I head for the  characteristic  Folkingestraat,  where  I am rewarded with many quirky, independent shops. I walk into De Bourgondier, a delicacy  shop  selling  dozens  of  types  of cheeses, gifts and Groninger specialities. Drawn  to  the  golden  goodness  of  the Dutch  cheese,  many  readily  available  to taste,  I  follow  the  shopkeeper’s  recommendation  to  try  their  new  Groninger spiced cheese with cloves and mustard. It has the salty creamy texture of Gouda yet with a punchy flavour. I  continue  on  to  the  Vismarkt,  after  the Grote  Markt,  the  second  biggest  market square with regular food and textile markets throughout the week. At the top of the square sits the imposing Korenbeurs, built in  the  1860s.  Once  a  wheat  exchange, now a supermarket, the neoclassical building has a beautiful and bright interior. The cast  iron  structure  with  large  ceiling  windows, helped traders to check the quality of the grains through their colour.

Hanseatic trade Silently towering over it, is the late-medieval church the Der Aa-Kerk. Painted in historic ochre yellow, the church was named after a former nearby stream, the Drentsche A. It is no longer in active use; the Der Aa-Kerk can be hired as a venue for events, conferences and even club nights. Alongside it, in the shadows of the church I find a tiny shop

In the shadow of the Der Aa-Kerk is the cosy shop Het Hanze Huis, inspired by the Hanseatic league or Hansa. Groningen became part of this association of merchants in 1282.

called Het Hanze Huis, after the Hanseatic trade league that helped Groningen to become a centre of trade. Inside I am instantly handed a glass of hot kwast, a sour, wintery lemonade. The shop is almost too small for the wealth of colours and  products  inside.  “All  our  products come  from  independent  European  companies that are at least 100 years in their trade,” the shopkeeper tells me. “We select only quality products from their place of origin, that don’t have a supermarket feel to them.” Certainly none of the brands I see look  familiar,  which  is  both  disorientating and  intriguing:  marzipan  from  Lübeck  in Germany,  syrups  from  Lille  in  France, sweets from Turin in Italy… Before long it is time for dinner again and I make my way to the Poelestraat. With bars and  dance  cafes  lining  the  street  –  albeit currently  shut  –  this  is  the  centre  for Groninger nightlife. For my meal I settle on

One of the latest additions to Groningen is the Infoversum, a dome-shaped cinema that was thought up by professor Edwin Valentijn to make science more accessible to the general public.

grand  café  Time  Out  serving  regional dishes with a twist that all have a title in the local  dialect.  In  my  best  Gronings  I  order ‘Neem  joen  gemak’  (take  your  pick),  the schnitzel, a dish of the day. Unfortunately the waiter is from the neighbouring province of  Friesland  so  my  attempt  falls  on  deaf ears. After a fulfilling meal and an intensely sweet  dessert  of  white  chocolate  brulee ‘Zo wit as snij’ (white as snow), I make my way back to the station to end the trip.

Groningen in short - With just over 200,000 inhabitants and still growing, it is the seventh largest city in the Netherlands. - An inhabitant in Groningen is called ‘stadjer’ and in the local dialect the city is called ‘Grunnen’. - Once crowned best cycling city of the Netherlands, locals take the bike on average 1.3 times a day, much more often than the national average of 0.8. - Stadjers are very proud of their city, competing with 74 other cities around Europe, Groningers proved to be the happiest inhabitants in their home town. - The city is built on the end of a low sand hill and the oldest remnants date to 300 BC. The current centre is still roughly the same as the original 11th century layout. - Celebrating its 400th anniversary last year, the Rijksuniversiteit Groningen (known as the RUG) is the second oldest still existing university in the country.