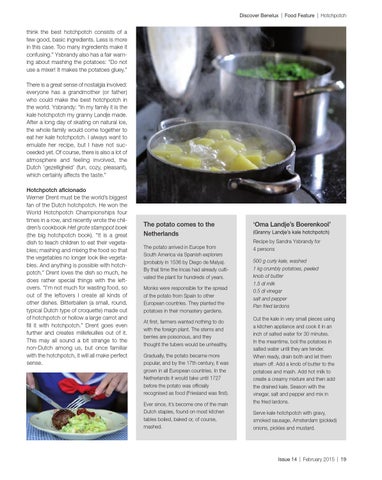 think  the  best  hotchpotch  consists  of  a few good, basic ingredients. Less is more in this case. Too many ingredients make it confusing.” Ysbrandy also has a fair warning about mashing the potatoes: “Do not use a mixer! It makes the potatoes gluey.” There is a great sense of nostalgia involved: everyone  has  a  grandmother  (or  father) who  could  make  the  best  hotchpotch  in the world. Ysbrandy: “In my family it is the kale hotchpotch my granny Landje made. After a long day of skating on natural ice, the whole family would come together to eat her kale hotchpotch. I always want to emulate  her  recipe,  but  I  have  not  succeeded yet. Of course, there is also a lot of atmosphere  and  feeling  involved,  the Dutch  ‘gezelligheid’  (fun,  cozy,  pleasant), which certainly affects the taste.” Hotchpotch aficionado Werner Drent must be the world’s biggest fan of the Dutch hotchpotch. He won the World  Hotchpotch  Championships  four times in a row, and recently wrote the children’s cookbook Het grote stamppot boek (the  big  hotchpotch  book).  “It  is  a  great dish to teach children to eat their vegetables; mashing and mixing the food so that the vegetables no longer look like vegetables. And anything is possible with hotchpotch.” Drent loves the dish so much, he does  rather  special  things  with  the  leftovers. “I’m not much for wasting food, so out  of  the  leftovers  I  create  all  kinds  of other dishes. Bitterballen (a small, round, typical Dutch type of croquette) made out of hotchpotch or hollow a large carrot and fill  it  with  hotchpotch.”  Drent  goes  even further  and  creates  millefeuilles  out  of  it. This  may  all  sound  a  bit  strange  to  the non-Dutch  among  us,  but  once  familiar with the hotchpotch, it will all make perfect sense.

The potato comes to the Netherlands The potato arrived in Europe from South America via Spanish explorers (probably in 1536 by Diego de Malya). By that time the Incas had already cultivated the plant for hundreds of years. Monks were responsible for the spread of the potato from Spain to other  European countries. They planted the potatoes in their monastery gardens. At first, farmers wanted nothing to do with the foreign plant. The stems and berries are poisonous, and they thought the tubers would be unhealthy. Gradually, the potato became more popular, and by the 17th century, it was grown in all European countries. In the Netherlands it would take until 1727 before the potato was officially  recognised as food (Friesland was first). Ever since, it’s become one of the main Dutch staples, found on most kitchen tables boiled, baked or, of course, mashed.

‘Oma Landje’s Boerenkool’ (Granny Landje’s kale hotchpotch) Recipe by Sandra Ysbrandy for  4 persons 500 g curly kale, washed 1 kg crumbly potatoes, peeled knob of butter 1.5 dl milk 0.5 dl vinegar salt and pepper Pan fried lardons Cut the kale in very small pieces using a kitchen appliance and cook it in an inch of salted water for 30 minutes.  In the meantime, boil the potatoes in salted water until they are tender.  When ready, drain both and let them steam off. Add a knob of butter to the potatoes and mash. Add hot milk to create a creamy mixture and then add the drained kale. Season with the  vinegar, salt and pepper and mix in  the fried lardons. Serve kale hotchpotch with gravy, smoked sausage, Amsterdam (pickled) onions, pickles and mustard.