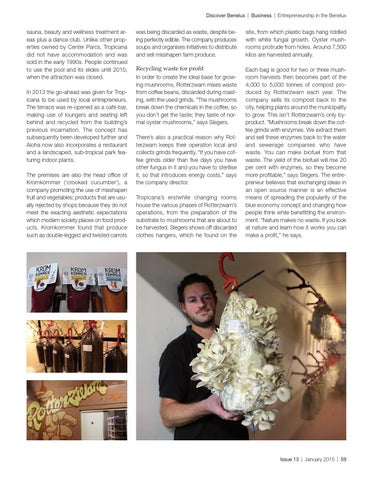 sauna, beauty and wellness treatment areas plus a dance club. Unlike other properties owned by Center Parcs, Tropicana did  not  have  accommodation  and  was sold in the early 1990s. People continued to use the pool and its slides until 2010, when the attraction was closed. In 2013 the go-ahead was given for Tropicana  to  be  used  by  local  entrepreneurs. The terrace was re-opened as a café-bar, making  use  of  loungers  and  seating  left behind  and  recycled  from  the  building’s previous  incarnation.  The  concept  has subsequently been developed further and Aloha now also incorporates a restaurant and a landscaped, sub-tropical park featuring indoor plants.  The  premises  are  also  the  head  office  of Kromkommer  (‘crooked  cucumber’),  a company promoting the use of misshapen fruit and vegetables; products that are usually rejected by shops because they do not meet  the  exacting  aesthetic  expectations which modern society places on food products.  Kromkommer  found  that  produce such as double-legged and twisted carrots

was being discarded as waste, despite being perfectly edible. The company produces soups and organises initiatives to distribute and sell misshapen farm produce.

Each bag is good for two or three mushroom harvests then becomes part of the 4,000  to  5,000  tonnes  of  compost  produced  by  Rotterzwam  each  year.  The company  sells  its  compost  back  to  the city, helping plants around the municipality to grow. This isn’t Rotterzwam’s only byproduct. “Mushrooms break down the coffee grinds with enzymes. We extract them and sell these enzymes back to the water and  sewerage  companies  who  have waste.  You  can  make  biofuel  from  that waste. The yield of the biofuel will rise 20 per  cent  with  enzymes,  so  they  become more profitable,” says Slegers. The entrepreneur believes that exchanging ideas in an  open  source  manner  is  an  effective means of spreading the popularity of the blue economy concept and changing how people think while benefitting the environment. “Nature makes no waste. If you look at nature and learn how it works you can make a profit,” he says.

In order to create the ideal base for growing mushrooms, Rotterzwam mixes waste from coffee beans, discarded during roasting, with the used grinds. “The mushrooms break down the chemicals in the coffee, so you don’t get the taste; they taste of normal oyster mushrooms,” says Slegers. There’s  also  a  practical  reason  why  Rotterzwam  keeps  their  operation  local  and collects grinds frequently. “If you have coffee  grinds  older  than  five  days  you  have other fungus in it and you have to sterilise it, so that introduces energy costs,” says the company director. Tropicana’s  erstwhile  changing  rooms house the various phases of Rotterzwam’s operations,  from  the  preparation  of  the substrate to mushrooms that are about to be harvested. Slegers shows off discarded clothes  hangers,  which  he  found  on  the