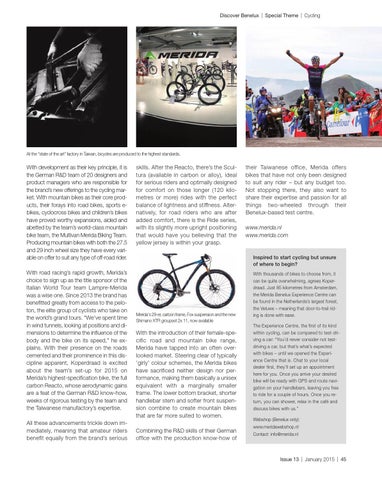 At the "state of the art" factory in Taiwan, bicycles are produced to the highest standards.

With development as their key principle, it is the German R&D team of 20 designers and product managers who are responsible for the brand’s new offerings to the cycling market. With mountain bikes as their core products, their forays into road bikes, sports ebikes, cyclocross bikes and children’s bikes have proved worthy expansions, aided and abetted by the team’s world-class mountain bike team, the  Multivan Merida Biking Team. Producing mountain bikes with both the 27.5 and 29 inch wheel size they have every variable on offer to suit any type of off-road rider. With road racing’s rapid growth, Merida’s choice to sign up as the title sponsor of the Italian  World  Tour  team  Lampre-Merida was a wise one. Since 2013 the brand has benefitted greatly from access to the peloton, the elite group of cyclists who take on the world’s grand tours. “We’ve spent time in wind tunnels, looking at positions and dimensions to determine the influence of the body  and  the  bike  on  its  speed,”  he  explains.  With  their  presence  on  the  roads cemented and their prominence in this discipline  apparent,  Koperdraad  is  excited about  the  team’s  set-up  for  2015  on Merida’s highest-specification bike, the full carbon Reacto, whose aerodynamic gains are a feat of the German R&D know-how, weeks of rigorous testing by the team and the Taiwanese manufactory’s expertise.  All these advancements trickle down immediately, meaning that amateur riders benefit equally from the brand’s serious

skills. After the Reacto, there’s the Scultura  (available  in  carbon  or  alloy),  ideal for serious riders and optimally designed for  comfort  on  those  longer  (120  kilometres  or  more)  rides  with  the  perfect balance of lightness and stiffness. Alternatively,  for  road  riders  who  are  after added comfort, there is the Ride series, with its slightly more upright positioning that  would  have  you  believing  that  the yellow jersey is within your grasp.

their  Taiwanese  office,  Merida  offers bikes that have not only been designed to  suit  any  rider  –  but  any  budget  too. Not  stopping  there,  they  also  want  to share their expertise and passion for all things  two-wheeled  through  their Benelux-based test centre. www.merida.nl www.merida.com

Inspired to start cycling but unsure of where to begin? With thousands of bikes to choose from, it can be quite overwhelming, agrees Koperdraad. Just 85 kilometres from Amsterdam, the Merida Benelux Experience Centre can be found in the Netherlands’s largest forest, the Veluwe – meaning that door-to-trail ridMerida's 29-er, carbon frame, Fox suspension and the new Shimano XTR groupset 2x 11, now available

ing is done with ease. The Experience Centre, the first of its kind

With the introduction of their female-specific  road  and  mountain  bike  range, Merida  have  tapped  into  an  often  overlooked market. Steering clear of typically ‘girly’ colour schemes, the Merida bikes have  sacrificed  neither  design  nor  performance, making them basically a unisex equivalent  with  a  marginally  smaller frame. The lower bottom bracket, shorter handlebar stem and softer front suspension  combine  to  create  mountain  bikes that are far more suited to women.

within cycling, can be compared to test-dri-

ving a car: “You’d never consider not testdriving a car, but that’s what’s expected with bikes – until we opened the Experience Centre that is. Chat to your local dealer first, they'll set up an appointment here for you. Once you arrive your desired bike will be ready with GPS and route navigation on your handlebars, leaving you free to ride for a couple of hours. Once you return, you can shower, relax in the café and discuss bikes with us.” Webshop (Benelux only): Contact: info@merida.nl