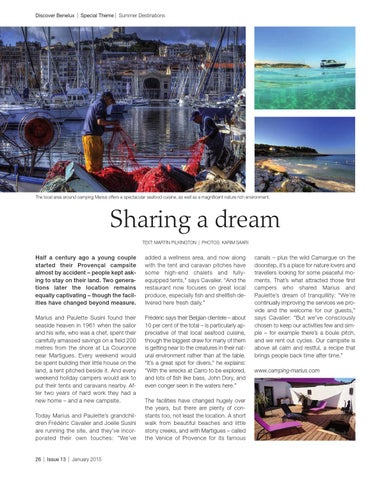 The local area around camping Marius offers a spectacular seafood cuisine, as well as a magnificent nature rich environment.

Half a century ago a young couple started their Provençal campsite almost by accident – people kept asking to stay on their land. Two generations later the location remains equally captivating – though the facilities have changed beyond measure.

added a wellness area, and now along with the tent and caravan pitches have some  high-end  chalets  and  fullyequipped tents,” says Cavalier. “And the restaurant  now  focuses  on  great  local produce, especially fish and shellfish delivered here fresh daily.”

Marius  and  Paulette  Susini  found  their seaside heaven in 1961 when the sailor and his wife, who was a chef, spent their carefully amassed savings on a field 200 metres  from  the  shore  at  La  Couronne near  Martigues.  Every  weekend  would be spent building their little house on the land, a tent pitched beside it. And every weekend holiday campers would ask to put their tents and caravans nearby. After  two  years  of  hard  work  they  had  a new home – and a new campsite.

Frédéric says their Belgian clientele – about 10 per cent of the total – is particularly appreciative  of  that  local  seafood  cuisine, though the biggest draw for many of them is getting near to the creatures in their natural environment rather than at the table. “It’s a great spot for divers,” he explains: “With the wrecks at Carro to be explored, and lots of fish like bass, John Dory, and even conger seen in the waters here.”

Today  Marius  and  Paulette’s  grandchildren Frédéric Cavalier and Joelle Susini are running the site, and they’ve incorporated  their  own  touches:  “We’ve

The  facilities  have  changed  hugely  over the  years,  but  there  are  plenty  of  constants too, not least the location. A short walk  from  beautiful  beaches  and  little stony creeks, and with Martigues – called the  Venice  of  Provence  for  its  famous

canals – plus the wild Camargue on the doorstep, it’s a place for nature lovers and travellers looking for some peaceful moments.  That’s  what  attracted  those  first campers  who  shared  Marius  and Paulette’s  dream  of  tranquillity:  “We’re continually improving the services we provide  and  the  welcome  for  our  guests,” says  Cavalier:  “But  we’ve  consciously chosen to keep our activities few and simple  –  for  example  there’s  a  boule  pitch, and we rent out cycles. Our campsite is above  all  calm  and  restful,  a  recipe  that brings people back time after time.” www.camping-marius.com