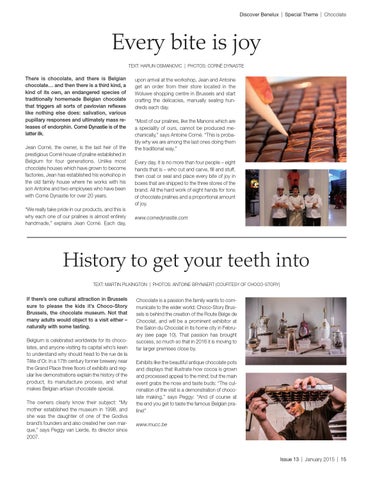 There is chocolate, and there is Belgian chocolate… and then there is a third kind, a kind of its own, an endangered species of traditionally homemade Belgian chocolate that triggers all sorts of pavlovian reflexes like nothing else does: salivation, various pupillary responses and ultimately mass releases of endorphin. Corné Dynastie is of the latter ilk. Jean  Corné,  the  owner,  is  the  last  heir  of  the prestigious Corné house of praline established in Belgium  for  four  generations.  Unlike  most chocolate houses which have grown to become factories, Jean has established his workshop in the  old  family  house  where  he  works  with  his son Antoine and two employees who have been with Corné Dynastie for over 20 years.  “We really take pride in our products, and this is why each one of our pralines is almost entirely handmade,”  explains  Jean  Corné.  Each  day,

upon arrival at the workshop, Jean and Antoine get  an  order  from  their  store  located  in  the Woluwe shopping centre in Brussels and start crafting  the  delicacies,  manually  sealing  hundreds each day. “Most of our pralines, like the Manons which are a  speciality  of  ours,  cannot  be  produced  mechanically,” says Antoine Corné. “This is probably why we are among the last ones doing them the traditional way.” Every day, it is no more than four people – eight hands that is – who cut and carve, fill and stuff, then coat or seal and place every bite of joy in boxes that are shipped to the three stores of the brand. All the hard work of eight hands for tons of chocolate pralines and a proportional amount of joy. www.cornedynastie.com

History to get your teeth into TEXT: MARTIN PILKINGTON  |  PHOTOS: ANTOINE BRYNAERT (COURTESY OF CHOCO-STORY)

If there’s one cultural attraction in Brussels sure to please the kids it’s Choco-Story Brussels, the chocolate museum. Not that many adults would object to a visit either – naturally with some tasting. Belgium is celebrated worldwide for its chocolates, and anyone visiting its capital who’s keen to understand why should head to the rue de la Tête d’Or. In a 17th century former brewery near the Grand Place three floors of exhibits and regular live demonstrations explain the history of the product,  its  manufacture  process,  and  what makes Belgian artisan chocolate special. The  owners  clearly  know their  subject:  “My mother established the museum in 1998, and she  was  the  daughter  of  one  of  the  Godiva brand’s founders and also created her own marque,” says Peggy van Lierde, its director since 2007.

Chocolate is a passion the family wants to communicate to the wider world: Choco-Story Brussels is behind the creation of the Route Belge de Chocolat, and will be a prominent exhibitor at the Salon du Chocolat in its home city in February  (see  page  10).  That  passion  has  brought success, so much so that in 2016 it is moving to far larger premises close by. Exhibits like the beautiful antique chocolate pots and displays that illustrate how cocoa is grown and processed appeal to the mind; but the main event grabs the nose and taste buds: “The culmination of the visit is a demonstration of chocolate  making,”  says  Peggy:  “And  of  course  at the end you get to taste the famous Belgian praline!”   www.mucc.be