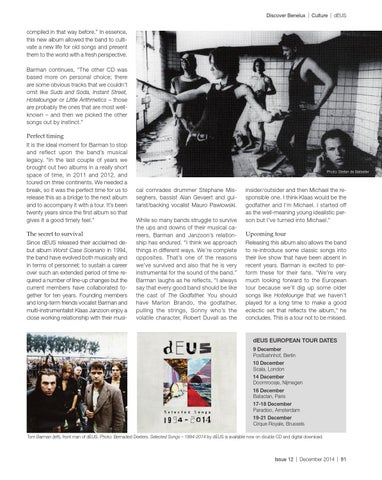 compiled in that way before.” In essence, this new album allowed the band to cultivate a new life for old songs and present them to the world with a fresh perspective. Barman  continues,  “The  other  CD  was based  more  on  personal  choice;  there are some obvious tracks that we  couldn’t omit  like  Suds and Soda, Instant Street, Hotellounger or Little Arithmetics – those are probably the ones that are most wellknown  –  and  then  we  picked  the  other songs out by instinct.”

Perfect timing It is the ideal moment for Barman to stop and  reflect  upon  the  band’s  musical legacy.  “In  the  last  couple  of  years  we brought out two albums in a really short space  of  time,  in  2011  and  2012,  and toured on three continents. We needed a break, so it was the perfect time for us to release this as a bridge to the next album and to accompany it with a tour. It’s been twenty years since the first album so that gives it a good timely feel.”

The secret to survival Since dEUS released their acclaimed debut album Worst Case Scenario in 1994, the band have evolved both musically and in terms of personnel; to sustain a career over such an extended period of time required a number of line-up changes but the current  members  have  collaborated  together  for  ten  years.  Founding  members and long-term friends vocalist Barman and multi-instrumentalist Klaas Janzoon enjoy a close working relationship with their musi-

cal  comrades  drummer  Stéphane  Misseghers,  bassist  Alan  Gevaert  and  guitarist/backing  vocalist  Mauro  Pawlowski. While so many bands struggle to survive the ups and downs of their musical careers,  Barman  and  Janzoon’s  relationship has endured. “I think we approach things in different ways. We’re complete opposites.  That’s  one  of  the  reasons we’ve survived and also that he is very instrumental for the sound of the band.” Barman laughs as he reflects, “I always say that every good band should be like the  cast  of  The Godfather. You  should have  Marlon  Brando,  the  godfather, pulling  the  strings,  Sonny  who’s  the volatile  character,  Robert  Duvall  as  the

insider/outsider and then Michael the responsible one. I think Klaas would be the godfather and I’m Michael. I started off as the well-meaning young idealistic person but I’ve turned into Michael.”

Upcoming tour Releasing this album also allows the band to  re-introduce  some  classic  songs  into their live show that have been absent in recent  years.  Barman  is  excited  to  perform  these  for  their  fans.  “We’re  very much  looking  forward  to  the  European tour  because  we’ll  dig  up  some  older songs  like  Hotellounge that  we  haven’t played  for  a  long  time  to  make  a  good eclectic  set  that  reflects  the  album,”  he concludes. This is a tour not to be missed.