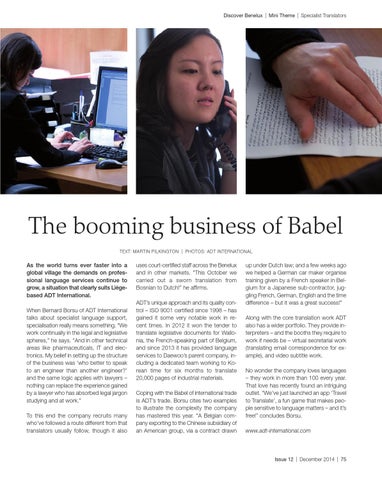 As the world turns ever faster into a global village the demands on professional language services continue to grow, a situation that clearly suits Liègebased ADT International. When Bernard Borsu of ADT International talks  about  specialist  language  support, specialisation really means something. “We work continually in the legal and legislative spheres,” he says. “And in other technical areas  like  pharmaceuticals,  IT  and  electronics. My belief in setting up the structure of the business was ‘who better to speak to  an  engineer  than  another  engineer?’ and the same logic applies with lawyers – nothing can replace the experience gained by a lawyer who has absorbed legal jargon studying and at work.” To  this  end  the  company  recruits  many who’ve followed a route different from that translators  usually  follow,  though  it  also

uses court-certified staff across the Benelux and  in  other  markets.  “This  October  we carried  out  a  sworn  translation  from  Bosnian to Dutch!” he affirms. ADT’s unique approach and its quality control – ISO 9001 certified since 1998 – has gained  it  some  very  notable  work  in  recent  times.  In  2012  it  won  the  tender  to translate legislative documents for Wallonia, the French-speaking part of Belgium, and since 2013 it has provided language services to Daewoo’s parent company, including a dedicated team working to Korean  time  for  six  months  to  translate 20,000 pages of industrial materials.  Coping with the Babel of international trade is ADT’s trade. Borsu cites two examples to  illustrate  the  complexity  the  company has  mastered  this  year.  “A  Belgian  company exporting to the Chinese subsidiary of an American group, via a contract drawn

up under Dutch law; and a few weeks ago we helped a German car maker organise training given by a French speaker in Belgium for a Japanese sub-contractor, juggling French, German, English and the time difference – but it was a great success!” Along with the core translation work ADT also has a wider portfolio. They provide interpreters – and the booths they require to work if needs be – virtual secretarial work (translating email correspondence for example), and video subtitle work.  No wonder the company loves languages – they work in more than 100 every year. That love has recently found an intriguing outlet. “We’ve just launched an app ‘Travel to Translate’, a fun game that makes people sensitive to language matters – and it’s free!” concludes Borsu. www.adt-international.com