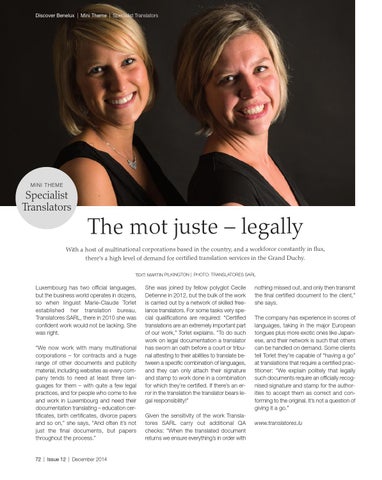 The mot juste – legally With a host of multinational corporations based in the country, and a workforce constantly in flux, there’s a high level of demand for certified translation services in the Grand Duchy. TEXT: MARTIN PILKINGTON |  PHOTO: TRANSLATORES SARL

Luxembourg  has  two  official  languages, but the business world operates in dozens, so  when  linguist  Marie-Claude  Torlet  established  her  translation  bureau,  Translatores SARL, there in 2010 she was confident work would not be lacking. She was right. “We  now  work  with  many  multinational corporations  –  for  contracts  and  a  huge range  of  other  documents  and  publicity material, including websites as every company  tends  to  need  at  least  three  languages for them – with quite a few legal practices, and for people who come to live and  work  in  Luxembourg  and  need  their documentation translating – education certificates, birth certificates, divorce papers and so on,” she says, “And often it’s not just  the  final  documents,  but  papers throughout the process.”

She  was  joined  by  fellow  polyglot  Cecile Detienne in 2012, but the bulk of the work is carried out by a network of skilled freelance translators. For some tasks very special  qualifications  are  required:  “Certified translations are an extremely important part of our work,” Torlet explains. “To do such work on legal documentation a translator has sworn an oath before a court or tribunal attesting to their abilities to translate between a specific combination of languages, and  they  can  only  attach  their  signature and stamp to work done in a combination for which they’re certified. If there’s an error in the translation the translator bears legal responsibility!” Given  the  sensitivity  of  the  work  Translatores  SARL  carry  out  additional  QA checks:  “When  the  translated  document returns we ensure everything’s in order with

nothing missed out, and only then transmit the final certified document to the client,” she says.  The company has experience in scores of languages,  taking  in  the  major  European tongues plus more exotic ones like Japanese, and their network is such that others can be handled on demand. Some clients tell Torlet they’re capable of “having a go” at translations that require a certified practitioner:  “We  explain  politely  that  legally such documents require an officially recognised signature and stamp for the authorities to accept them as correct and conforming to the original. It’s not a question of giving it a go.” www.translatores.lu