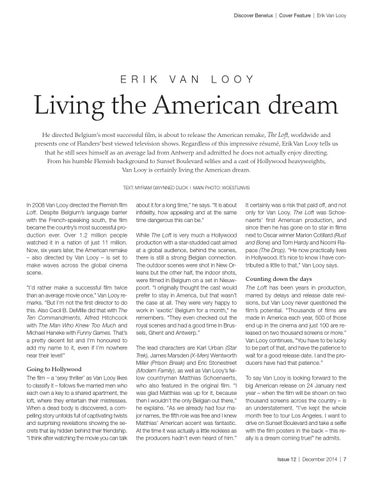 Living the American dream He directed Belgium’s most successful film, is about to release the American remake, The Loft, worldwide and presents one of Flanders’ best viewed television shows. Regardless of this impressive résumé, Erik Van Looy tells us that he still sees himself as an average lad from Antwerp and admitted he does not actually enjoy directing. From his humble Flemish background to Sunset Boulevard selfies and a cast of Hollywood heavyweights, Van Looy is certainly living the American dream. TEXT: MYRIAM GWYNNED DIJCK | MAIN PHOTO: WOESTIJNVIS

In 2008 Van Looy directed the Flemish film Loft. Despite Belgium’s language barrier with the French-speaking south, the film became the country’s most successful production ever. Over 1.2 million people watched it in a nation of just 11 million. Now, six years later, the American remake – also directed by Van Looy – is set to make waves across the global cinema scene. “I’d rather make a successful film twice than an average movie once,” Van Looy remarks. “But I’m not the first director to do this. Also Cecil B. DeMille did that with The Ten Commandments, Alfred Hitchcock with The Man Who Knew Too Much and Michael Haneke with Funny Games. That’s a pretty decent list and I’m honoured to add my name to it, even if I’m nowhere near their level!”

Going to Hollywood The film – a ‘sexy thriller’ as Van Looy likes to classify it – follows five married men who each own a key to a shared apartment, the loft, where they entertain their mistresses. When a dead body is discovered, a compelling story unfolds full of captivating twists and surprising revelations showing the secrets that lay hidden behind their friendship. “I think after watching the movie you can talk

about it for a long time,” he says. “It is about infidelity, how appealing and at the same time dangerous this can be.” While The Loft is very much a Hollywood production with a star-studded cast aimed at a global audience, behind the scenes, there is still a strong Belgian connection. The outdoor scenes were shot in New Orleans but the other half, the indoor shots, were filmed in Belgium on a set in Nieuwpoort. “I originally thought the cast would prefer to stay in America, but that wasn’t the case at all. They were very happy to work in ‘exotic’ Belgium for a month,” he remembers. “They even checked out the royal scenes and had a good time in Brussels, Ghent and Antwerp.” The lead characters are Karl Urban (Star Trek), James Marsden (X-Men) Wentworth Miller (Prison Break) and Eric Stonestreet (Modern Family), as well as Van Looy’s fellow countryman Matthias Schoenaerts, who also featured in the original film. “I was glad Matthias was up for it, because then I wouldn’t the only Belgian out there,” he explains. “As we already had four major names, the fifth role was free and I knew Matthias’ American accent was fantastic. At the time it was actually a little reckless as the producers hadn’t even heard of him.”

It certainly was a risk that paid off, and not only for Van Looy. The Loft was Schoenaerts’ first American production, and since then he has gone on to star in films next to Oscar winner Marion Cotillard (Rust and Bone) and Tom Hardy and Noomi Rapace (The Drop). “He now practically lives in Hollywood. It’s nice to know I have contributed a little to that,” Van Looy says.

Counting down the days The Loft has been years in production, marred by delays and release date revisions, but Van Looy never questioned the film’s potential. “Thousands of films are made in America each year, 500 of those end up in the cinema and just 100 are released on two thousand screens or more.” Van Looy continues, “You have to be lucky to be part of that, and have the patience to wait for a good release date. I and the producers have had that patience.” To say Van Looy is looking forward to the big American release on 24 January next year – when the film will be shown on two thousand screens across the country – is an understatement. “I’ve kept the whole month free to tour Los Angeles. I want to drive on Sunset Boulevard and take a selfie with the film posters in the back – this really is a dream coming true!” he admits.