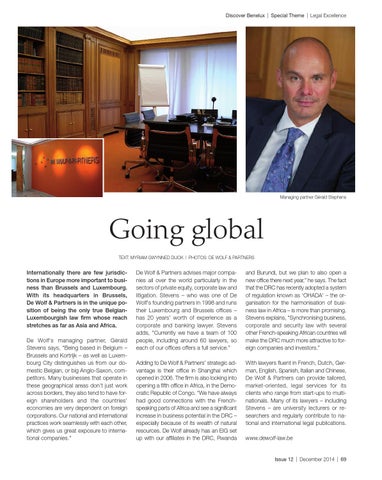 Internationally there are few jurisdictions in Europe more important to business than Brussels and Luxembourg. With its headquarters in Brussels, De Wolf & Partners is in the unique position of being the only true BelgianLuxembourgish law firm whose reach stretches as far as Asia and Africa. De Wolf's managing partner, Gérald Stevens says, “Being based in Belgium – Brussels and Kortrijk – as well as Luxembourg City distinguishes us from our domestic Belgian, or big Anglo-Saxon, competitors. Many businesses that operate in these geographical areas don’t just work across borders, they also tend to have foreign shareholders and the countries’ economies are very dependent on foreign corporations. Our national and international practices work seamlessly with each other, which gives us great exposure to international companies."

De Wolf & Partners advises major companies all over the world particularly in the sectors of private equity, corporate law and litigation. Stevens – who was one of De Wolf's founding partners in 1998 and runs their Luxembourg and Brussels offices – has 20 years’ worth of experience as a corporate and banking lawyer. Stevens adds, “Currently we have a team of 100 people, including around 60 lawyers, so each of our offices offers a full service.”

and Burundi, but we plan to also open a new office there next year,” he says. The fact that the DRC has recently adopted a system of regulation known as 'OHADA' – the organisation for the harmonisation of business law in Africa – is more than promising. Stevens explains, “Synchronising business, corporate and security law with several other French-speaking African countries will make the DRC much more attractive to foreign companies and investors.”

Adding to De Wolf & Partners’ strategic advantage is their office in Shanghai which opened in 2006. The firm is also looking into opening a fifth office in Africa, in the Democratic Republic of Congo. “We have always had good connections with the Frenchspeaking parts of Africa and see a significant increase in business potential in the DRC – especially because of its wealth of natural resources. De Wolf already has an EIG set up with our affiliates in the DRC, Rwanda

With lawyers fluent in French, Dutch, German, English, Spanish, Italian and Chinese, De Wolf & Partners can provide tailored, market-oriented, legal services for its clients who range from start-ups to multinationals. Many of its lawyers – including Stevens – are university lecturers or researchers and regularly contribute to national and international legal publications. www.dewolf-law.be