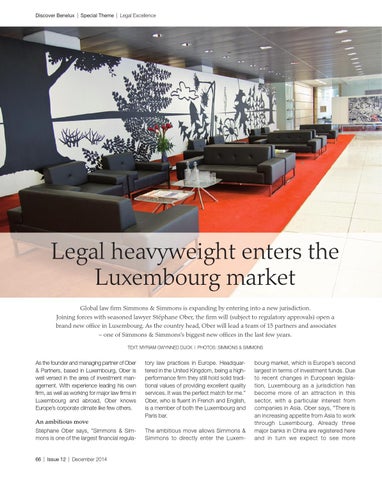 As the founder and managing partner of Ober & Partners, based in Luxembourg, Ober is well versed in the area of investment management. With experience leading his own firm, as well as working for major law firms in Luxembourg and abroad, Ober knows Europe’s corporate climate like few others.

tory law practices in Europe. Headquartered in the United Kingdom, being a highperformance firm they still hold solid traditional values of providing excellent quality services. It was the perfect match for me.” Ober, who is fluent in French and English, is a member of both the Luxembourg and Paris bar.

An ambitious move Stéphane Ober says, “Simmons & Simmons is one of the largest financial regula-

bourg market, which is Europe’s second largest in terms of investment funds. Due to recent changes in European legislation, Luxembourg as a jurisdiction has become more of an attraction in this sector, with a particular interest from companies in Asia. Ober says, “There is an increasing appetite from Asia to work through Luxembourg. Already three major banks in China are registered here and in turn we expect to see more