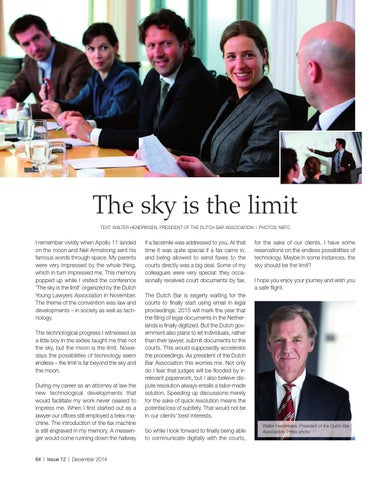 The sky is the limit TEXT: WALTER HENDRIKSEN, PRESIDENT OF THE DUTCH BAR ASSOCIATION | PHOTOS: NBTC

I remember vividly when Apollo 11 landed on the moon and Neil Armstrong sent his famous words through space. My parents were very impressed by the whole thing, which in turn impressed me. This memory popped up while I visited the conference ‘The sky is the limit’ organized by the Dutch Young Lawyers Association in November. The theme of the convention was law and developments – in society as well as technology. The technological progress I witnessed as a little boy in the sixties taught me that not the sky, but the moon is the limit. Nowadays the possibilities of technology seem endless – the limit is far beyond the sky and the moon. During my career as an attorney at law the new technological developments that would facilitate my work never ceased to impress me. When I first started out as a lawyer our offices still employed a telex machine. The introduction of the fax machine is still engraved in my memory. A messenger would come running down the hallway

if a facsimile was addressed to you. At that time it was quite special if a fax came in, and being allowed to send faxes to the courts directly was a big deal. Some of my colleagues were very special: they occasionally received court documents by fax.

for the sake of our clients, I have some reservations on the endless possibilities of technology. Maybe in some instances, the sky should be the limit? I hope you enjoy your journey and wish you a safe flight.

The Dutch Bar is eagerly waiting for the courts to finally start using email in legal proceedings. 2015 will mark the year that the filing of legal documents in the Netherlands is finally digitized. But the Dutch government also plans to let individuals, rather than their lawyer, submit documents to the courts. This would supposedly accelerate the proceedings. As president of the Dutch Bar Association this worries me. Not only do I fear that judges will be flooded by irrelevant paperwork, but I also believe dispute resolution always entails a tailor-made solution. Speeding up discussions merely for the sake of quick resolution means the potential loss of subtlety. That would not be in our clients’ best interests. So while I look forward to finally being able to communicate digitally with the courts,