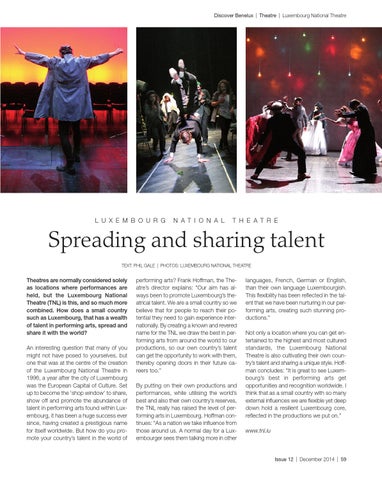 Theatres are normally considered solely as locations where performances are held, but the Luxembourg National Theatre (TNL) is this, and so much more combined. How does a small country such as Luxembourg, that has a wealth of talent in performing arts, spread and share it with the world? An interesting question that many of you might not have posed to yourselves, but one that was at the centre of the creation of  the  Luxembourg  National  Theatre  in 1996, a year after the city of Luxembourg was the European Capital of Culture. Set up to become the ‘shop window’ to share, show off and promote the abundance of talent in performing arts found within Luxembourg, it has been a huge success ever since, having created a prestigious name for itself worldwide. But how do you promote your country’s talent in the world of

performing arts? Frank Hoffman, the Theatre’s  director  explains:  “Our  aim  has  always been to promote Luxembourg’s theatrical talent. We are a small country so we believe that for people to reach their potential they need to gain experience internationally. By creating a known and revered name for the TNL we draw the best in performing arts from around the world to our productions,  so  our  own  country’s  talent can get the opportunity to work with them, thereby  opening  doors  in  their  future  careers too.” By putting on their own productions and performances,  while  utilising  the  world’s best and also their own country’s reserves, the TNL really has raised the level of performing arts in Luxembourg. Hoffman continues: “As a nation we take influence from those around us. A normal day for a Luxembourger sees them talking more in other

languages,  French,  German  or  English, than their own language Luxembourgish. This flexibility has been reflected in the talent that we have been nurturing in our performing arts, creating such stunning productions.” Not only a location where you can get entertained to the highest and most cultured standards,  the  Luxembourg  National  Theatre is also cultivating their own country’s talent and sharing a unique style. Hoffman concludes: “It is great to see Luxembourg’s  best  in  performing  arts  get opportunities and recognition worldwide. I think that as a small country with so many external influences we are flexible yet deep down  hold  a  resilient  Luxembourg  core, reflected in the productions we put on.”  www.tnl.lu