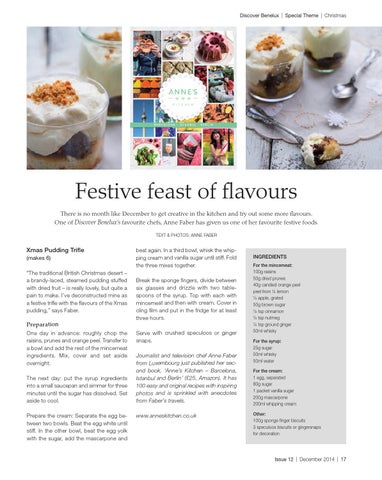 Festive feast of flavours There is no month like December to get creative in the kitchen and try out some more flavours. One of Discover Benelux’s favourite chefs, Anne Faber has given us one of her favourite festive foods. TEXT & PHOTOS: ANNE FABER

Xmas Pudding Trifle (makes 6) “The traditional British Christmas desert – a brandy-laced, steamed pudding stuffed with dried fruit – is really lovely, but quite a pain to make. I’ve deconstructed mine as a festive trifle with the flavours of the Xmas pudding,” says Faber.

beat again. In a third bowl, whisk the whipping cream and vanilla sugar until stiff. Fold the three mixes together. Break the sponge fingers, divide between six glasses and drizzle with two tablespoons of the syrup. Top with each with mincemeat and then with cream. Cover in cling film and put in the fridge for at least three hours.

Preparation One day in advance: roughly chop the raisins, prunes and orange peel. Transfer to a bowl and add the rest of the mincemeat ingredients. Mix, cover and set aside overnight. The next day: put the syrup ingredients into a small saucepan and simmer for three minutes until the sugar has dissolved. Set aside to cool. Prepare the cream: Separate the egg between two bowls. Beat the egg white until stiff. In the other bowl, beat the egg yolk with the sugar, add the mascarpone and

Serve with crushed speculoos or ginger snaps. Journalist and television chef Anne Faber from Luxembourg just published her second book, ‘Anne’s Kitchen – Barcelona, Istanbul and Berlin’ (£25, Amazon). It has 100 easy and original recipes with inspiring photos and is sprinkled with anecdotes from Faber’s travels. www.anneskitchen.co.uk