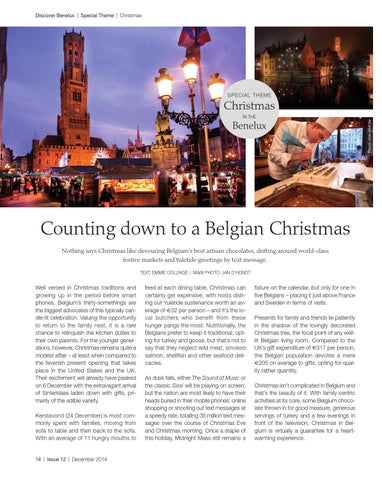 SP ECIA L THE ME

Well versed in Christmas traditions and growing up in the period before smart phones, Belgium’s thirty-somethings are the biggest advocates of this typically candle-lit celebration. Valuing the opportunity to return to the family nest, it is a rare chance to relinquish the kitchen duties to their own parents. For the younger generations, however, Christmas remains quite a modest affair – at least when compared to the feverish present opening that takes place in the United States and the UK. Their excitement will already have peaked on 6 December with the extravagant arrival of Sinterklaas laden down with gifts, primarily of the edible variety. Kerstavond (24 December) is most commonly spent with families, moving from sofa to table and then back to the sofa. With an average of 11 hungry mouths to

feed at each dining table, Christmas can certainly get expensive, with hosts dishing out Yuletide sustenance worth an average of €32 per person – and it’s the local butchers who benefit from these hunger pangs the most. Nutritionally, the Belgians prefer to keep it traditional, opting for turkey and goose, but that’s not to say that they neglect wild meat, smoked salmon, shellfish and other seafood delicacies. As dusk falls, either The Sound of Music or the classic Sissi will be playing on screen, but the nation are most likely to have their heads buried in their mobile phones: online shopping or shooting out text messages at a speedy rate, totalling 35 million text messages over the course of Christmas Eve and Christmas morning. Once a staple of this holiday, Midnight Mass still remains a

fixture on the calendar, but only for one in five Belgians – placing it just above France and Sweden in terms of visits. Presents for family and friends lie patiently in the shadow of the lovingly decorated Christmas tree, the focal point of any welllit Belgian living room. Compared to the UK’s gift expenditure of €317 per person, the Belgian population devotes a mere €205 on average to gifts, opting for quality rather quantity. Christmas isn’t complicated in Belgium and that’s the beauty of it. With family-centric activities at its core, some Belgium chocolate thrown in for good measure, generous servings of turkey and a few evenings in front of the television, Christmas in Belgium is virtually a guarantee for a heartwarming experience.