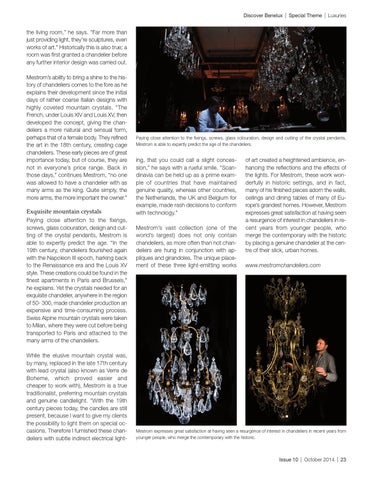 the living room,” he says. “Far more than just providing light, they’re sculptures, even works of art.” Historically this is also true; a room was first granted a chandelier before any further interior design was carried out. Mestrom’s ability to bring a shine to the history of chandeliers comes to the fore as he explains their development since the initial days of rather coarse Italian designs with highly coveted mountain crystals. “The French, under Louis XIV and Louis XV, then developed the concept, giving the chandeliers a more natural and sensual form, perhaps that of a female body. They refined the art in the 18th century, creating cage chandeliers. These early pieces are of great importance today, but of course, they are not in everyone’s price range. Back in those days,” continues Mestrom, “no one was allowed to have a chandelier with as many arms as the king. Quite simply, the more arms, the more important the owner.”

Exquisite mountain crystals Paying close attention to the fixings, screws, glass colouration, design and cutting of the crystal pendants, Mestrom is able to expertly predict the age. “In the 19th century, chandeliers flourished again with the Napoleon III epoch, harking back to the Renaissance era and the Louis XV style. These creations could be found in the finest apartments in Paris and Brussels,” he explains. Yet the crystals needed for an exquisite chandelier, anywhere in the region of 50- 300, made chandelier production an expensive and time-consuming process. Swiss Alpine mountain crystals were taken to Milan, where they were cut before being transported to Paris and attached to the many arms of the chandeliers. While the elusive mountain crystal was, by many, replaced in the late 17th century with lead crystal (also known as Verre de Boheme, which proved easier and cheaper to work with), Mestrom is a true traditionalist, preferring mountain crystals and genuine candlelight. “With the 19th century pieces today, the candles are still present, because I want to give my clients the possibility to light them on special occasions. Therefore I furnished these chandeliers with subtle indirect electrical light-

Paying close attention to the fixings, screws, glass colouration, design and cutting of the crystal pendants, Mestrom is able to expertly predict the age of the chandeliers.

ing, that you could call a slight concession,” he says with a rueful smile. “Scandinavia can be held up as a prime example of countries that have maintained genuine quality, whereas other countries, the Netherlands, the UK and Belgium for example, made rash decisions to conform with technology.” Mestrom’s vast collection (one of the world’s largest) does not only contain chandeliers, as more often than not chandeliers are hung in conjunction with appliques and girandoles. The unique placement of these three light-emitting works

of art created a heightened ambience, enhancing the reflections and the effects of the lights. For Mestrom, these work wonderfully in historic settings, and in fact, many of his finished pieces adorn the walls, ceilings and dining tables of many of Europe’s grandest homes. However, Mestrom expresses great satisfaction at having seen a resurgence of interest in chandeliers in recent years from younger people, who merge the contemporary with the historic by placing a genuine chandelier at the centre of their slick, urban homes. www.mestromchandeliers.com

Mestrom expresses great satisfaction at having seen a resurgence of interest in chandeliers in recent years from younger people, who merge the contemporary with the historic.