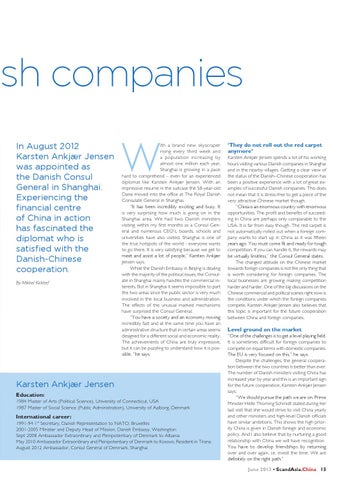 ish companies In August 2012 Karsten Ankjær Jensen was appointed as the Danish Consul General in Shanghai. Experiencing the financial centre of China in action has fascinated the diplomat who is satisfied with the Danish-Chinese cooperation. By Mikkel Keldorf

ith a brand new skyscraper rising every third week and a population increasing by almost one million each year, Shanghai is growing in a pace hard to comprehend – even for an experienced diplomat like Karsten Ankjær Jensen. With an impressive resume in the suitcase the 58-year-old Dane moved into the office at The Royal Danish Consulate General in Shanghai. “It has been incredibly exciting and busy. It is very surprising how much is going on in the Shanghai area. We had two Danish ministers visiting within my first months as a Consul General and numerous CEO’s, boards, schools and universities have also visited. Shanghai is one of the true hotspots of the world - everyone wants to go there. It is very satisfying because we get to meet and assist a lot of people,” Karsten Ankjær Jensen says. While the Danish Embassy in Beijing is dealing with the majority of the political issues, the Consulate in Shanghai mainly handles the commercial interests. But in Shanghai it seems impossible to part the two areas since the public sector is very much involved in the local business and administration. The effects of the unusual marked mechanisms have surprised the Consul General. “You have a society and an economy moving incredibly fast and at the same time you have an administrative structure that in certain areas seems designed for a different social and economic reality. The achievements of China are truly impressive, but it can be puzzling to understand how it is possible, “he says.

‘They do not roll out the red carpet anymore’ Karsten Ankjær Jensen spends a lot of his working hours visiting various Danish companies in Shanghai and in the nearby villages. Getting a clear view of the status of the Danish–Chinese cooperation has been a positive experience with a lot of great examples of successful Danish companies. This does not mean that it is stress-free to get a piece of the very attractive Chinese market though. “China is an enormous country with enormous opportunities. The profit and benefits of succeeding in China are perhaps only comparable to the USA. It is far from easy though. The red carpet is not automatically rolled out when a foreign company wants to start up in China as it was fifteen years ago. You must come fit and ready for tough competition. If you can handle it, the rewards may be virtually limitless,” the Consul General states. The changed attitude on the Chinese market towards foreign companies is not the only thing that is worth considering for foreign companies. The local businesses are growing making competition harder and harder. One of the big discussions on the Chinese commercial and political scenes right now is the conditions under which the foreign companies compete. Karsten Ankjær Jensen also believes that this topic is important for the future cooperation between China and foreign companies.

Level ground on the market “One of the challenges is to get a level playing field. It is sometimes difficult for foreign companies to compete on equal terms with domestic companies. The EU is very focused on this,” he says. Despite the challenges, the general cooperation between the two countries is better than ever. The number of Danish ministers visiting China has increased year by year and this is an important sign for the future cooperation, Karsten Ankjær Jensen says: “We should pursue the path we are on. Prime Minister Helle Thorning Schmidt stated during her last visit that she would strive to visit China yearly and other ministers and high-level Danish officials have similar ambitions. This shows the high priority China is given in Danish foreign and economic policy. And I also believe that by nurturing a good relationship with China we will have recognition. You have to develop friendships by returning over and over again, i.e. invest the time. We are definitely on the right path.” June 2013 • ScandAsia.China 15 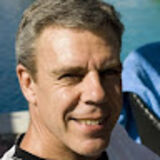